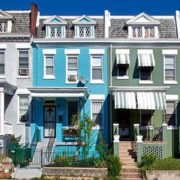 It’s easy and intuitive to look at a property and if you don’t like the first impression you get of it, walk away. Unfortunately, real estate investing isn’t that kind of party: If you want to win this game, you have to play strictly by the numbers. This means looking at statistics, prices, and environmental factors, not at the faded siding, broken windows, and missing shingles. Each of the points that follows is a guide about which factors mean “low income” but don’t mean “bad” when it comes to investing in a home in that neighborhood.

Every neighborhood has a few different crime rates—for the purposes of investing, you want to pay primary attention to property crimes, as they’re going to affect the security of your investment. But far more important are the “quality of life” crimes, like vandalism, littering, and public urination. Why? Because those crimes indicate that a neighborhood isn’t just desperate, it’s also “self-loathing”—the people who live there aren’t just committing crimes to get by, but they’re doing it because they simply don’t care about the neighborhood. (It can be hard to get stats on those kinds of crime specifics; your best bet is to call the local police department and ask them.)

A neighborhood that has prostitution, drug dealing, and other money-making crimes but doesn’t have the “quality of life” crimes isn’t necessarily bad—it’s just low income, and low income-but-good means there’s a potential for a value investment. Genuine “war zones” where the police don’t even visit if you call in a vandalism report because the bangers break every window in the neighborhood every Friday just on principle? Yeah, don’t buy there.

One of the most important ways of separating a low income-but-good-investment neighborhood from a just-plain-bad neighborhood is by looking at what is going to happen in that neighborhood over the next few years. For example, buying a home in a neighborhood where there is currently a large lot being cleared for the addition of a Costco is significantly better than buying one where the local Wal-Mart just moved out, and nothing is moving in to replace it—even if, at the moment, the Costco neighborhood house looks like the worse investment.

Alternatively, if you can find a neighborhood with a clear downside with a clear expiration date, you could be looking at a winner. For example, imagine a place where it sucks to live because there’s a stanky breeze from a mushroom farm that blows over the whole city—but the mushroom farm just declared that they’ve purchased a new facility and they’re moving a town over in six months. That window, after the declaration has been made but before the move occurs, is your window. Property values are depressed because only desperate people are willing to live there right now, but that will change once the smell goes away, so buy before they shoot upward.

[Bonus: One more subtle way to pick up on a just-starting-to-grow neighborhood is to look at the days-on-market of the homes that are selling in the neighborhood. If the average DoM six months ago was 90+, but today it’s down to 45 or less without a rise in property prices (and the rest of the numbers look good), buy! A downward-trending DoM is almost always a sign of soon-to-rise property values.]

Let’s be frank: Moving costs money, which means that people in low income neighborhoods tend to move less often. Look up the net migration numbers in your chosen neighborhood—if they’re very low (below 9%), you may be able to take advantage. Warning: This can be a genuine downside if you land a problem tenant who simply won’t move until the police show up and physically drag him away—that’s a lot of lost rent and probably a lot of vengeance damage you’ll have to repair.

But! If your tenant screening techniques are on par and you maintain yourself as an available, easy-to-talk-to landlord that is willing to deal with an occasional legitimate disaster empathetically, you can keep a hardworking low income tenant paying mostly on time for year after year. Statistically speaking, the best low-income tenants have a reliable if low source of income — often, they’re retired or disabled and collecting stable monthly benefits. Other than the occasional late payment due to something like an unexpected car repair, these tenants can handily turn “low income” into a benefit.

Your Investment Goals Can Change What “Bad” Is

Some investors are looking to buy a property that they can maintain using the rent and have their wealth build up as the property appreciates over time. Others are looking for a property that they intend to hold for as long as they can continue to pull a solid monthly cash flow out of it. Investors looking for that appreciating property are honestly probably not going to find it in a low income neighborhood (unless you can find one on the verge of a major improvement, as above).

But investors looking for high cash-flow can definitely find a killer investment in a low income neighborhood—because rents tend to move less than property values do. So it’s relatively easy to buy a home that costs 50% of the identical home one neighborhood over, and charge only 15% less in rent. The end result is that you can set up a high cash flow investment with relatively little initial investment—at which point, yes, you might have slightly more difficulty with tenant screening and maintenance requests than you would one neighborhood over, but your capitalization rate will be well worth it.

Bonus: The Difference Between Rented and Unrented Properties in Very Low Income Areas

There’s one catch to all of this that novice low-income investors can easily miss: if the home you’re buying is in a critically low income area and there’s not currently a renter, you absolutely must inspect it (or pay someone to inspect it) before you buy it. The reason why is simple: In many very low income areas, an empty house is almost immediately stripped of everything inside that can be sold, including plumbing, HVAC, water heater, appliances, and basically anything made of metal or worth a dime on the street corner.

It’s terribly easy to buy a home that looks like a legitimate structure, only to find out that you need to invest four or five times what you paid just to make it legally livable again. All of which you can avoid by purchasing a home that currently has a renter (and thus a certificate of habitability or whatever your city’s equivalent is). Even a seller that offers written evidence of an inspection on Monday can end up with a home stripped by Wednesday morning—unless someone is physically living there, and you buy the lease along with the property.

In short, you don’t need to be scared of investing in low income areas—you just have to be aware of when “low income” and “bad” don’t match up, and prepare to take advantage of how the two don’t overlap. Good luck!

We are republishing this article to help out our newer readers.

Investors: What’s your take? What’s the difference between a “low income” and a “bad” neighborhood? Do you invest in lower income areas? Why or why not?

8 Pros & Cons of Including Utilities With Rent for Your Investment Pro...
Scroll to top