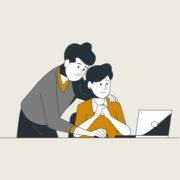 With all the news covering the rapid price increases in the housing market these days (and the constant talk of a bubble), it’s natural to see similarities to 2007. In fact, housing prices over the last year have increased at a rate rapidly approaching 2007 rates, according to the Case-Shiller Index

I’ve written extensively on how supply, demand, and low interest rates create a perfect storm for appreciation right now. But I want to share some additional data that shows how the credit markets, which were the primary driver of the 2000s bubble and financial crisis, are much healthier today.

While the price increases are comparable, the underlying reasons for the price growth are very different. So, while fears of a bubble and subsequent burst are valid, the housing market’s foundations remain sound.

What caused the last bubble?

The bubble of the mid-2000s was largely driven by speculative buying enabled by loose credit standards. Take a look at this excellent chart from the Urban Institute, which explains the problem very well. The chart measures the percentage of single-family homes that are likely to default.

Between 2003 and 2007, mortgage lenders severely loosened their credit standards. This looser credit enabled buyers who were not well-positioned to service their debt to buy increasingly expensive houses. The rest is history. Risky debt crashed, bringing the housing market and much of the financial system down with it.

Why are things different now?

The government has since enacted stricter rules to govern how banks and financial institutions can lend. And as the chart above demonstrates, we remain in a period of relatively tight credit. Meaning that the people who are getting mortgages are generally well-positioned to pay those mortgages each month.

If you look at more granular and recent data from the Mortgage Bankers Association, it shows that mortgage availability has tightened even more since the pandemic began. Credit availability plunged in the spring of 2020 and has only recently begun to recover.

But even with credit standards loosening modestly, we’re still not even close to where we were pre-pandemic and remain a far way off from conditions in the credit markets that enabled the bubble and burst of the mid-2000s.

What does this mean for the housing market?

To me, this data affirms my belief that the housing market is wild but fundamentally sound.

While we hear stories about bidding wars and properties selling for tens—or even hundreds—of thousands of dollars above the asking price, the people buying this housing are either paying cash or in a good position, relatively speaking, to service the debt on the properties.

Things must change sooner or later—this level of price appreciation is unhealthy and unsustainable. But the data continues to suggest that the change will occur gradually, not in the form of a crash.