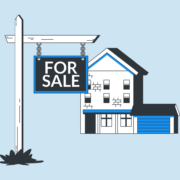 It’s no secret that lack of housing inventory is a major factor in the crazy price appreciation in the current housing market. There are many ways to measure housing inventory, and pretty much all of them say the same thing.

While several factors are creating the recent buying frenzy (demand and low interest rates being the biggest factors), we’re unlikely to return to a more stable housing market with a healthier growth rate without inventory recovering.

When might inventory recover? I’ve pulled data from Redfin, a national real estate brokerage, and will be using Active Listings as the primary metric for forecasting inventory. Active Listings basically means the total number of property listings that were active in a given month.

We’ll look at the remainder of 2021 to help investors develop their own strategy for managing and growing their portfolios. As you can see from the graph below, listings are way down, even compared to 2020.

When preparing to forecast a time series (a data set over time), you generally look for a few patterns off the bat.

Just using our eyes, we can see that this data presents both a negative trend and annual seasonality.

It’s not huge, but you can see that Active Listings were already trending down slightly over the last few years. So when we talk about inventory “recovering,” I’m talking about getting back to around (or even slightly below) 2019 levels.

The second thing to note in these graphs is the consistent seasonality in the data.

Seasonality doesn’t really have anything to do with the seasons. It just means that you see the same pattern in the data over a certain time period. For our analysis, we see annual seasonality: The pattern of peaks and valleys is very similar each year. Active Listings are lower in the first and fourth quarters and higher in the second and third quarters.

Because of this seasonality, the first step in forecasting inventory is projecting what will happen to inventory this year if the seasonal pattern holds and nothing else happens. In other words, based on what we know about January-April of 2021, what would history tell us will happen in May-December?

I created a seasonal index and projected just that. You can see the projected numbers in green below.

It doesn’t look great. Just as we’d expect, we see that inventory would rise over the summer months and then fall again towards the end of the year—but not really get us anywhere close to where we were pre-pandemic.

In normal times, this type of forecast could be sufficient. I would use our trend and seasonality and a couple of fancy statistical models to project inventory going forward.

But we’re not in normal times, and unfortunately, all the fancy tricks I’ve learned won’t work here. Mathematical models require data that the model can learn from, and I’m not aware of any data that could teach us about the present moment. Instead, we need to use some intuition about the housing market to forecast what might happen next.

To do that, I will incorporate three additional factors into the forecast: new construction, improved sales conditions, and foreclosure inventory.

Last year was a weird year for new construction. Early in 2020, construction was at its highest levels since the financial crisis. It then rapidly declined to 2014 levels as the COVID-19 pandemic took hold, according to data from MacroTrends.net.

On average, it takes about eight months for a housing start to hit the market. As of April 2021, we should be getting beyond the lapse in housing starts at the beginning of the pandemic.

On the other hand, we haven’t yet seen the inventory from housing starts in the latter half of 2020 hit the market. This gives me a reason to believe that new construction could boost inventory on top of our seasonality forecast.

Over the course of the pandemic, governments have put protections in place to limit foreclosures. This has led to all-time lows in foreclosure activity.

But that doesn’t tell the whole story. Millions of Americans are still in forbearance programs, meaning they are working with their lenders to delay or reduce mortgage payments temporarily. What happens when the foreclosure moratoriums end is still unclear, but personally, I am not overly worried about a foreclosure crisis.

If you look at the data, the number of borrowers in forbearance has been steadily declining. Back in March 2020, it was estimated that about 8% of all borrowers were in forbearance. That number shrank to 5.5% at the end of 2020 and is now down to about 4.2%. The means an estimated 2.1 million borrowers are still in forbearance.

Does that mean 2.1 million people are about to be foreclosed on? I don’t think so. According to the Mortgage Bankers Association, about 87% of people in forbearance have exited their forbearance agreements with a repayment plan in place, and their loans have been reinstated.

This is excellent news, as it means the number of homeowners facing imminent foreclosure is not that high. It looks like these forbearance programs have worked.

But there still could be an increase in foreclosures when the moratorium is lifted. If we assume that 13% of those 2.1 million borrowers in forbearance will exit forbearance without an agreement with their lender in place, that will give us about 273,000 loans facing potential foreclosure.

The last factor I will pull into my forecast is improved sales conditions, which is by far the hardest to quantify and ventures into guesswork territory.

What I want to do is quantify an improvement in a homeowner’s willingness to sell. Intuitively it makes sense that people didn’t want to sell their homes during a pandemic. We also know that many have been fearful of selling because they don’t want to become buyers in this crazy market.

But I have to think that will change, and some recent data backs me up. In one recent survey, the number of people who said it’s a good time to sell moved up from 61% to 67%.

Without any other data to help quantify this effect, I modeled a 6% increase above our seasonal expectations from May-July and 8% from August-December 2021.

I moved it up to 8% just based on a hunch. It’s not really scientific. I actually think it could accelerate faster, but I don’t have any other data to back that up, so I’m going to stick to the numbers I have.

When I combine all these factors, I get a forecast for 2021 that looks like this.

I broke out each factor in the graph so you can see where some of the increases come from. My gut says that improved sales conditions will rise faster than this, but I’m going to stick to the data I have right now. You can also see from this graph that even if I’m wrong and more homeowners face foreclosure, it won’t impact total inventory that much.

Put in historical context, my model shows us getting close to 2020 inventory levels over the summer and even surpassing 2020 numbers towards the end of the year. This forecast does not project inventory getting very close to pre-pandemic levels at all in 2021.

Ultimately, what really drives inventory is the number of existing homes (not new construction) placed on the market. Hopefully, my forecast for improved sales conditions is overly conservative, and it accelerates faster, helping inventory recover more quickly than shown here.

What will happen beyond 2021 is even less clear. New construction starts remain a big question mark. With prices for lumber and other materials running high, we may see a slowdown in housing starts. This could definitely reduce inventory, even if improved sales conditions continuously improve as I suspect they will.

How Should You Invest to Prepare for Inflation?
Scroll to top