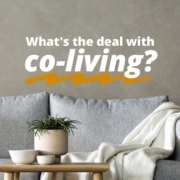 If you aren’t familiar with the idea of co-living, it’s a residential living model that provides shared housing for people. Co-living is hardly a new idea, though—it’s been around as long as people have.

Co-living exists in various forms, such as student housing and house hacking. However, some notable companies have begun implementing this lifestyle at an institutional level with a modern twist. This allows the residents to live in a community setting at an affordable price, which is why it’s more popular in gateway markets like New York, San Francisco, and Los Angeles.

Understanding this living model is important because it can attract more tenants and ultimately improve your property’s bottom line. Here’s what you should know.

What is co-living and how does it work?

Here are some, but not all, forms of co-living that exist today:

Table A. Main Types of Co-Living

Class A co-living is the premium option primarily geared toward young working professionals who enjoy living in a community but also want some privacy. Some large apartment complexes with 100+ units are incorporating these types of co-living units into the unit mix as means to improve the average $/sf and attract more tenants. In Los Angeles, this type of unit typically costs between $1,200 to $1,600 per month with utilities and cleaning fees included.

Class B co-living has limited amenities and is geared toward people with tighter budgets. The units are smaller than Class A units and may have shared bathrooms. In Los Angeles, this type of unit will cost between $900 to $1,200 per month with utilities and cleaning fees included. Some cheaper co-living apartments may not include furniture, utilities, and cleaning.

Pods co-living comes with the least privacy out of all the co-living options, but it’s also the most cost-effective. This type of co-living is essentially like renting a bunk bed, but in modern pods that include electrical outlets, storage space, night lamp, and shades. In other words, they can be quite comfortable. Depending on the design, you can have many residents or pods in one room.

Student co-living is an upgrade from your usual student housing. For example, this type of co-living space typically comes with a large common kitchen with multiple refrigerators, washer/dryers, and kitchen sinks to accommodate the higher occupancy. Some units may have additional study room space with computers and printers inside the suite, and private bathrooms. These are all features that you normally wouldn’t see inside standard student housing.

There are also co-living buildings designed for certain professionals, such as software engineers or musicians who need specific features for work.

Pros and cons of co-living units in developments

There are many good reasons for developers to incorporate co-living units into their developments, so let’s discuss the pros and cons of co-living for the tenants and how this strategy ultimately affects the property’s bottom line.

Pros for the tenants

Cons for the tenants

Now that we’ve got most of the pros out of the way, let’s discuss some issues that might discourage tenants from choosing co-living.

On average, apartment units that utilize the co-living strategy can achieve 25% to 35% higher rental income. It can be a win-win scenario because the owner collects more rent and the tenants save money by having roommates.

For example, a 4bd/4ba class A co-living unit can achieve the same rental income per square footage ($/sf) or higher as a studio unit, which typically has the highest $/sf among all unit types. Generally speaking, the $/sf for traditional apartment units decreases as the number of bedrooms increase, but this trend is reversed for co-living apartments.

Here’s a potential scenario in Los Angeles for the rental income per square footage for a class A traditional apartment and a class A co-living apartment.

Table B. Estimated Rental Income for Traditional and Co-Living Apartment

There are not many two-bedroom co-living units, so this option is noted as not available. The four-bedroom unit for the traditional apartment is actually a house, which explains the low $/sf. You won’t be able to find many four-bedroom apartments unless it’s co-living.

The traditional studio is generally crowned as the king of all unit types because of its high $/sf ($4.00/sf in this case). Studio is also by far the most compact, easiest to design, and most flexible unit to fit in a floor plan. However, co-living is changing the game completely. A 1,425 square feet 5bd/5ba unit is able to rent out at $6,700, or $1,340 per room, at $4.70/sf. This is about 18% higher compared to the studio’s $/sf and 32% higher to a 2bd/2ba unit. Essentially, your building is now generating 20% to 30% more income while the total costs and building area stay about the same.

Think about the value that co-living can generate!

Of course, co-living units will have higher operating expenses. The rent includes cleaning, electricity, and basic essentials like toilet paper and kitchen towels, so you should expect about $250-$300 higher operating expense per month per unit. In case you’re wondering how this affects your net operating income (NOI), here’s another table for you.

This is the additional net operating income you are generating by adding a 5bd/5ba co-living unit into your apartment. Of course, this number would be significantly higher if compared to a 2bd/2ba unit because the $/sf for a 2bd/2ba unit is lower than that for a studio.

The electrical fees are significant, but if you add solar panels to your building, you can cut down on or eliminate most of the electrical costs. You can even generate additional income from the other traditional tenants, increasing your NOI further. But, most importantly, it’s better for the environment.

The initial upfront cost for co-living units is slightly higher as well because you’ve to furnish the units. Expect to spend about $4,000 to furnish the living room and kitchen and about $2,000 for each bedroom.

Based on the metrics just mentioned, let’s do a quick calculation for the percentage change in NOI, your bottom line.

Co-living units can increase your NOI by approximately 18.8% based on these assumptions. This is based on the theoretical difference between a studio and a 5bd/5ba unit, so the actual number depends on your unit mix and design.

If you’re building a 50-unit apartment, it’s probably not wise to build (50) 5bd/5ba units. You will probably exceed the floor-to-area ratio (FAR) with that many 5bd/5ba units—and you won’t be able to lease out all the rooms. That’s is why it’s crucial to optimize the unit mix and floor plan based on market demand in order to maximize the occupancy rate and rental income.

You should also expect higher maintenance and repair costs for co-living units, but this won’t affect your NOI significantly because you have more tenants to collect security deposits from. That’s another reason why having a great property manager can make or break this business model.

Managing a co-living complex is very different from managing other types of properties and it requires experience. Some co-living managers simply list the units on websites like apartments.com, but it’s more effective if the property management company you hire already has a website, social media presence, and audience. I’ll cover some notable co-living management companies in a separate blog.

Looking back a few years, it was once much harder to finance a co-living project because they were an unusual property type. It’s easier to do now if you find the right lender, and it’ll get even easier as co-living becomes more popular.

Co-living is also considered a riskier project by most developers and lenders, so its cap rate is higher. For example, the cap rate for a class A traditional apartment complex in Santa Monica might be 4.0%, but increased to 5.0% for a class A co-living complex in the same neighborhood, even though its vacancy is low and has great debt coverage.

Be conservative when doing your underwriting for the refinancing and exit price. Otherwise, you might be disappointed when the valuation is not as rosy as you thought.

Co-living is harder to design because of its size and complexity. However, the cost per room is significantly lower.

For example, let’s assume that the total cost of building a studio is $300,000 and the total cost of a 5bd/5ba unit is $800,000. The difference is almost three times the cost, and a 5bd/5ba unit only costs $160,000 per room. However, this doesn’t necessarily mean that the cost per square footage (psf) is also lower. Because co-living units are more compact, the cost per square foot could be similar to that of a studio.

That said, development and design can become very complex. As such, it’s important to study what your target audience wants and analyze your plans and pro forma accordingly.

Another huge benefit for developing co-living units is the code constraints. Most development projects are constrained by the maximum allowable dwelling units, so if you can only build 10 units, then building co-living units rather than compact studio units may be a wise choice.

Grow your real estate business and raise your game with other people’s money!

Are you ready to help other investors build their wealth while you build your real estate empire? The road map outlined in this book helps investors looking to inject more private capital into their business—the most effective strategy for growth!

Co-living is a great multifamily strategy and is bound to explode in the next decade as the sharing economy continues to thrive. And, as rents become more unaffordable, more people will inevitably start looking for more cost-effective lifestyles like co-living.

For example, if the median market rent is $2,000 a month, then the median household income in that market must be at least $6,000 a month or more. However, this is simply not the case right now at the major gateway markets like New York and Los Angeles. The ITR ratio for Miami, for example, is currently around 1.8x.

On the other hand, co-living operators look at the ITR ratio through a different lens. They want to enter markets that are unaffordable—areas where some real estate investors stay away from. These are the places where value can be created, and there’s a huge untapped market. Furthermore, as land, material, and labor cost continue to rise, developers have to look for more creative ways to increase the property value in order to maintain profits.

It’s also important to touch on the topic of mental health. Covid has impacted our lives more than we could ever imagine, including making us more distant from one another. Comparatively, we’re now more aware of the importance of social interactions and meaningful connections. Co-living is a great strategy to bring us all together. It shouldn’t be seen as less desirable or compared to crowded college dorm rooms, which, for the record, I very much enjoyed when I was studying at UCLA.

In fact, co-living creates so many organic opportunities for each of us to connect with one another. We don’t have to feel so alone anymore. Let’s join the movement and make this world better in a different way.

What to Do After A Loved One Passes
Scroll to top