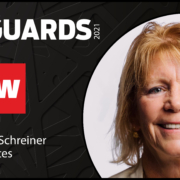 If you added up the impact that HousingWire’s Vanguard winners have had on the industry, you’d likely have a comprehensive list of the initiatives that have moved markets forward. These are the leaders who have dreamt, shaped and molded a better way to execute the home-buying journey. From injecting technology into the mortgage process to redefining the real estate agent and home shopper relationship, these leaders have laid the foundations for millions of homeowners. HousingWire sat down with three of these leaders: James O’Bryon, RE/MAX Gold Nation CEO, Cathleen Schreiner Gates, SimpleNexus CEO, and Phil Shoemaker, Homepoint president of originations, to learn more about the housing trends they’re closely watching, what they think will define 2022 and what they hope people remember them for when they retire.

Brena Nath: First off, congrats on being named a 2021 Vanguard. Who would you want to thank for helping you get where you are today?

Cathleen Schreiner Gates: I have to go with two people. The first one is Jonathan Corr, who was the executive that hired me at Ellie Mae and brought me into the mortgage business. He had a technology background similar to mine, and he saw in my background what he felt was needed at Ellie Mae. That just kind of got me into the space, and you know the old adage, “Once you’re in the space, you never leave the space.”

So, giving me the opportunity to lead and empowering me to do the things I knew we needed to do to grow as a company, that’s really what I think was the springboard for me to be where I am today. And then the second one would be Ben Miller and Matt Hansen, the co-founders of SimpleNexus, along with John Aslanian, who I had worked with at Ellie Mae for years. John said, “She can help us. Let’s talk to her. She can help us grow.” And I met them and was sold immediately. So having the opportunity I’m in today is clearly due to the co-founders of SimpleNexus.

Brena Nath What’s one accomplishment in your career that you’re really proud of?

Cathleen Schreiner Gates: Right now, I’d really have to list the work that I did at Ellie Mae to drive the incredible growth when I was there. When I joined, they had just IPO-ed earlier that year. They had closed the year in the low $50 million range, and over six or so years, we got it to half a billion in revenue, completely organizing ourselves for growth. So, I’m pretty proud of that because it allowed me to use everything I’d ever done or learned in my entire career. I got to apply it and see the results. Along with that, the most satisfying things are always helping leaders grow and mature into becoming leaders they want to be and giving them the empowerment to make the changes that they’re so skilled to make.

Brena Nath: How are you helping move markets forward?

Cathleen Schreiner Gates: You know, I’m tech biased. I’ve always believed that technology for technology’s sake is useless. But if you use technology as an enabler to disrupt and move an industry forward, that’s super powerful. So, I always look at how technology can actually change the game in a market, allow the stronger players in that market to be even stronger if they adopt and apply technology solutions in the right ways. So, I always look at that first. There are three sides to the triangle. So, I look at the technology enablement, and then, I look at the talent mix. And if you’ve got the right talent and the right technology, the third one would be the right sort of processes, looking at the way you’re going to operate. Those are a pretty killer trifecta. So, I look at everything through those three lenses.

Brena Nath: What are two trends in the mortgage and real estate industry that you’re closely watching?

Cathleen Schreiner Gates: I would say there’s a convergence going on of two markets that have historically been separate verticals but sort of collide in positive ways and that’s the real estate market and the mortgage market. I think those markets are converging because to the borrower, they want a seamless journey from their point of thought. Like, maybe I’m going to buy a house and then start looking through the real-estate alternatives and then need to flow straight into their mortgage process.

Historically, these have been two separate plays that are now coming together and integrating and weaving together into a seamless borrower experience. And guess what the enabler for that is? Technology. I think the other thing is just the speed with which the manufacture of a mortgage is happening. There will be a point in time where the mortgage will happen before you can organize for the movers to come move your stuff. So, I’m looking at all the different emerging technologies and these small companies that are playing with a piece of the process and automating it just a little bit more, bringing intelligence to it a little bit more, taking eyeballs off of things that automation can help with. I think that’s the other significant trend — investments in technology to speed up and take cost out of the process. The convergence of a lot of these. Those are the trends we’re looking a lot at.

Brena Nath: The past two years have been filled with a lot of uncertainty; what factors do you think will define 2022?

Cathleen Schreiner Gates: I think everyone’s talking about this to be honest and the reason is it’s real. The lenders out there have to compete for the borrower more than they’ve ever had to do. We have this massive bubble of borrowers coming into the market, and a lot of these homeowners coming into the market are what I call digital natives. They grew up in a digital world and so some of the conventional ways that lenders might’ve attracted borrowers are going to fall a little bit to the wayside. And the refis are going away, so it’s sort of how do you attract that borrower? How do you differentiate yourself from the digital natives to the millennials, and frankly, all the different demographics out there who are actually adopting more and more of a digital approach to their lives? So how do you compete for the borrower? I think that is massively important to the lenders.

And then coming out of the kind of year that the lenders have had, they had to really staff up to accommodate the volumes. So how fast do they staff down? How fast do they get efficient again and sort of reading the tea leaves and figuring out, “You know, the profitability on a loan is going down. Our costs are going up. Are we overstaffed?” Some lenders will be far better equipped to deal with it than others because they’ve been through these cycles before. And they have a sense of how to burst resources and then contract and then burst again and contract. A lot of the smartest lenders look for ways they won’t have to burst again the next time if they can automate, streamline and get smarter about the process.

Brena Nath: After you’re finished with your career, what do you hope people remember you for?

Cathleen Schreiner Gates: I had the opportunity to sort of retire two years ago and then I kind of got pulled back into SimpleNexus, so I’ve seen a little bit of what this is about. I was blown away by the sentiment coming from people who felt that I helped them build their career and be at a place where they could contribute and feel good about their career growth. Because we’re spending a lot of time doing this thing called our career. So absolutely, the most satisfying thing for me throughout my whole career has been helping people develop into strong leaders, watching them blossom, watching them have an impact and them feeling good about it.

Brena Nath: To wrap, what’s one piece of advice you would give people in this industry?

Cathleen Schreiner Gates: To me, in this industry and having been in other industries, I think the industry is still at the discovery stages of what technology can do to move the industry forward. So other vertical industries kind of grabbed on to tech a little bit earlier and maybe are a little bit further up the maturity curve. I think the mortgage industry, being as massive as it is, has an unlimited opportunity to really embrace technology and do fun things for it. We’re just at the beginning. So, the thing I would say to every leader is to sharpen your mind and learn about what technology enabling capabilities are out there that can help you with your business. Don’t put it in a box and let somebody else be the expert. Develop some knowledge of it.

Brena Nath: Is there anything else you would like to add?

Cathleen Schreiner Gates: Be curious. Look what’s out there. And the other thing I would say is to look through the lens of sustainability. In other words, I’ve been advocating looking at tech, but a lot of these ideas come and go very quickly. They’re like a fast burn. So, the layer I would add in there would be to look hard at the sustainability of anyone you partner with for any approach you take because you’re going to maybe make a decision and then that’s going to disrupt the way people operate inside your organization. And so, you pay a little bit of a price to disrupt. That’s change management. So, make sure this thing’s going to be sustainable for you, and it’s going to be a decision you’re going to be comfortable living with for a few years, not a few months.