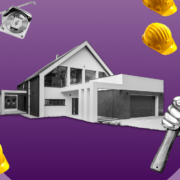 Keep reading to learn whether a turnkey home or fixer-upper is the right option for you:

A homebuyer’s guide to a competitive housing market

Four renovations to consider before selling your house

How much house can you afford to buy?

Buying a house that needs work? Projects to avoid

A turnkey home is a property that doesn’t require any major repairs or renovations. Basically, it’s 100% liveable and buyers can move in without worry. Some real estate agents use the term turnkey to describe a home that’s completely refurbished. While that’s not always the case, turnkeys are usually updated. That’s why they have a higher listing price than fixer-uppers.

A turnkey property is usually ideal for homebuyers looking for an investment property, or those who don’t want to take on home improvement projects. Buildword reported that 67% of turnkey buyers purchased their home to avoid being bothered with a fixer-upper.

A fixer-upper is exactly what it sounds like – a home that needs some work. Not all fixer-uppers are the same and some might require more work than others. While these homes have a lower price tag than turnkey properties, they aren’t necessarily cheap. Even if you’re a skilled handyman, home improvement projects are expensive. Especially if the fixer-upper ends up needing more work than you previously thought (which is a good possibility!)

According to Buildworld, 39% of homebuyers turned to fixer-uppers to save money. When it came to updating their homes, 63% had to re-paint, 59% had to put in new bathroom flooring, 52% updated the kitchen and 51% updated bathroom fixtures.

The costs to fix up a home varies. But there’s no denying the expenses add up quickly. Renovations are also time-consuming. According to 77% of those surveyed, home improvements took more time than they originally thought. 64% admitted the process was more stressful than planned, and another 57% said it was more expensive.

There are benefits and negatives to both turnkeys and fixer-uppers. While turnkeys are considered less work, they’re not always what they seem. On the surface, the home might look immaculate. But it’s important to make sure everything inside works like it should (the appliances, plumbing, etc.).

When it comes to buying a fixer-upper, don’t underestimate the amount of work needed to transform the home. If you go into the purchase thinking it’s saving you more money than buying a turnkey, think again.

The post Turnkey homes vs. fixer-uppers: The best home for your wallet appeared first on HousingWire.