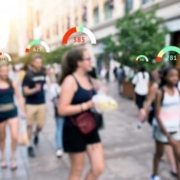 It’s no surprise that borrowers’ credit scores are a vital component to homeownership. That three-digit number determines a person’s financial worthiness and impacts just how much money they can borrow. However, a new study from real estate tech provider OJO Labs found that there is a staggering gap in credit support and guidance among those who need it most.

According to OJO, tools and expertise are least visible, accessible, and useful to groups with lower credit scores.

“I think the thing that’s really interesting is when you start to peel back the layers of the onion, there is a correlation between borrowers with lower credit scores and their access to information, what they’ve been taught and what their families believe to be true,” said Jerimiah Taylor, vice president of real estate and mortgage services at OJO Labs.

That’s not to say this lower credit score group isn’t actively pursuing mortgages. Out of those who were currently shopping for homes, respondents with fair credit scores were significantly more likely to be first-time homebuyers (81%), which the is the demographic getting squeezed out of today’s low-inventory market. Compared to those with good (46%) or great (34%) credit scores, people with fair credit reported the most difficulty in the overall buying process.

Homeownership is not a gateway to wealth for everyone. According to OJO, those with lower credit scores feel much more financial uncertainty, while the majority of those with great scores feel confident in their investment. While having lower credit makes the entire journey more difficult, the effect is particularly prominent when saving for a down payment, getting approved for a mortgage, and choosing the right mortgage

“Unfortunately there are adverse incentives in the industry,” Taylor said.

“If I’m an agent, broker, mortgage lender and I have two consumers — one that is financially savvy and fully prepared to transact and another one that isn’t as prepared and needs more help on their credit especially — the amount of money that I make if they’re buying roughly the same priced home is the same. However, the amount of effort that it takes to serve one consumer over the other can take significantly more time, and there’s where you have that disconnect,” Taylor said.

But there is some help for those with poorer credit. With the landmark CARES Act in 2020, Congress stipulated that mortgages in forbearance as a result of COVID-19 must be reported as “current” on credit reports. The legislation saved millions of homeowners from having their credit scores ruined during the most devastating year in recent U.S. history.

And to help these would-be homeowners, Rep. Maxine Waters, D-Calif., drafted a a down-payment assistance bill that would provide $25,000 to first-time homebuyers, but only those who are also first-generation homebuyers and economically disadvantaged — a cohort more likely to struggle to attain optimal credit.

In addition, the Federal Housing Finance Agency dropped a new refi-option targeted to lower-income borrowers with mortgages backed by Fannie and Freddie, but it requires borrowers to have a FICO score no lower than 620, which some industry experts noted thinned the pool of qualified participants.

“When you look at legislation, even the most well-intended legislation can have adverse consequences,” Taylor said. “When you look at the Dodd Frank Act and LO compensation rules, we have created this world where borrowers below a certain price point, lenders just can’t serve because they have to intentionally lose money because of the LO comp structure. Something like that, it’s just going to take time and focus to resolve,” said Taylor.

Mortgage credit availability did open up in March, the MBA reported, driven by the ongoing economic and job market recovery, which increased the number of low credit score and high LTV products.

The post The odds are stacked against homebuyers with lower credit appeared first on HousingWire.