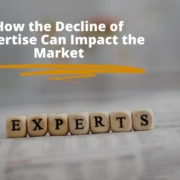 The year was 1999. An exclusive group of multi-billionaires gathered in Sun Valley, Idaho, just like they do every year.

As usual, no reporters were allowed within miles of their gathering. This was a safe place for the wealthiest Americans to freely share ideas, strategize, and break from the rigors and pressures they faced the other 51 weeks in 1999.

But something was different this year.

People were whispering about one of their most revered members.

“He’s lost his touch. He had a great run for about four decades, but he’s clearly fading into irrelevance.”

“The market has left his returns…and his old-fashioned thinking…in the dust. My high school grandson’s returns are three times higher than his.”

They were talking about Warren Buffett. And they were gloating about their massive wins from the run-up in tech stocks. Newer attendees like Jeff Bezos were celebrated while Buffett was discounted.

Buffett wasn’t ruffled. He knew what he believed, and he wasn’t about to trade decades of expertise and success through value investing principles to join yet another fad.

For Buffett, the issues surrounded the lack of actual value in the tech firms exploding in price. Companies like Amazon, Pets.com, and Webvan were the darlings of the S&P 500, yet, they had little to no profits driving their popularity.

Their popularity can also be called speculation.

Taxi drivers and college students were becoming overnight millionaires. Of course, many investment titans like Buffett were discarded as outdated relics of a soon-to-be-forgotten generation.

So how did Buffett respond? In his usual dry humor, he addressed the audience of doubters.

Buffett began by saying, “In the short term, the stock market is a voting machine, but in the long run, it is more like a weighing machine. In the end, the weighing opportunity wins, but in the short term, it will be determined by the voting chips. However, its voting mechanism is very undemocratic. Unfortunately, as you know, it does not certify voting qualifications.”

Elsewhere, Buffett said he preferred investing in Wrigley’s over tech. He said he had no idea where technology would be in a decade. But he knew how people would be chewing gum.

“Our approach is very much profiting from lack of change rather than from change. With Wrigley chewing gum, it’s the lack of change that appeals to me. I don’t think it is going to be hurt by the internet. That’s the kind of business I like.”

Of course, we all know what happened. The tech bubble burst, about $5 trillion was lost, and Buffett landed on top, again.

When everyone is mutually rewarded from the market’s rise, expertise is no longer celebrated.

This is a phenomenon that raises its head late in boom cycles. This is not new. There are many examples in the past century:

The Death of Expertise in 2022

So, what is going on now? Is this happening again?

I will say yes.

I know many people making a killing–millions of dollars–in real estate right now. Many of them were in high school, college, tech jobs, or engineering as recently as 2015. I applaud them!

I just spoke with a prospective investor who told me he’s made over $5 million in buying random parcels of land and reselling them a few years later. He’s a tech genius but only invests in real estate on the side.

Yesterday I spoke to one of our investors in Southern California. He told me the story of his family’s industrially zoned land near Los Angeles. He bought other family members out a few years ago when the land was worth $4 to $5 million. He just got an offer for $25 million, and his broker said he might be able to get $27 million. I’m so happy for him!

I applaud all of these investors! But there’s a problem.

Expertise is discounted late in cycles. When everyone is being rewarded relatively equally, it is hard to tell who the experts are. Therefore, it’s hard to know who to listen to and who to invest with.

How did this sound last time around? For those of us who were investing in real estate leading up to 2008, this is what we were hearing:

In the Summer of 2005, the soon-to-be-nominated Fed chair, Ben Bernanke, said: “We’ve never had a decline in house prices on a nationwide basis. So, what I think is more likely is that house prices will slow, maybe stabilize, and might slow consumption spending a bit. I don’t think it’s [going to] drive the economy too far from its full employment path, though.”

In mid-2007, U.S. Treasury Secretary Hank Paulsen told Fortune Magazine: “This is far and away the strongest global economy I’ve seen in my business lifetime.” His brother, John, a true expert, was shorting the housing market and made a fortune in the next few years.

P.T. Barnum said, “Nothing draws a crowd like a crowd.”

Where is the crowd rushing right now? And are we living and investing in a time where true expertise is devalued, and hype is the operating principle of the day?

Howard Marks said the top of a bubble is reached just after the crowds think the bull run will go on forever.

But trees don’t grow to the sky.

Marks, a true expert, made much of his fortune in late 2008 at the other end of the spectrum: buying distressed assets when the crowds thought markets would decline forever.

In the autumn of 2008, a reporter interviewed Marks about his strategies during the free-falling market. He said their firm, Oaktree Capital Management, was buying up to half a billion dollars in assets per week. The reporter said, “Wait, you mean you’re selling, right?” Marks said, “No! We’re buying. If not now, when?”

True experts like Buffett and Marks are often busy going against the herd.

How Can You Get Burned When Expertise is Declining?

There are probably many ways. Just look online. Check out the thousands of “news stories” and opinions regurgitated as facts.

The internet has caused people to think they are more informed than they are. Users think they understand a topic by quickly searching and skimming often misleading headlines. Before the internet, rigorous study and deep research were required to develop a strong opinion on a matter.

Part of the problem is a society that has produced today’s education system. When everyone is rewarded equally, people don’t have to think critically and research deeply to get an A. But this lack of judgment doesn’t play well in the real world, and it can result in us treating non-experts as gurus.

When I was a boy…no, I’m not going to tell you how I walked six miles uphill in waist-deep snow!

We didn’t have rubber mats on playgrounds when I was a kid. Our incentive to master the monkey bars was to avoid a skinned-up knee or a broken arm.

When we increase comfort, we kill aspiration. I fear that a society that has protected our kids from potential pain (I’m guilty as a dad!) may have also protected them from the ability to reason deeply and clearly delineate risk and return.

(Some of the comments in this six-paragraph rant came from a review of Tom Nichols’ book The Death of Expertise.)

I can see at least two obvious ways this could hurt your real estate career.

First, we all need to be lifelong learners. But I’m warning everyone to be careful who they are listening to. Look for true experts rather than Newrus.

Second, be careful who you invest with. You may passively invest in direct deals, turnkey homes, debt for house flippers, syndications, or funds. I applaud you. But I would warn you to do everything in your power to find the real experts. Put your money on them.

So, how can you tell if your “guru” is a real expert or just another Newru?

Have typically weathered multiple up and down cycles.

Pay the price when they’re wrong. (They put skin in the game and don’t make a killing from non-performance-based fees.)

Anticipate change. They don’t assume the future is the same as the past. (Just look at interest rate declines over several decades, for example. Do you really believe that will continue?)

Look bad when novices soar but shine brightly when the crowds are in turmoil.

Invest in boring deals in times when others chase shiny assets.

Are comfortable with chaos.

Experts who play the long game will win in the end. Don’t yield your common sense and experience to Newru-Gurus.

There will come a day when expertise is celebrated again. We’re in a late-cycle phenomenon, and the current situation could signify a coming reversal.

Then expertise will be celebrated as it should be, and true experts will shine as they always do.

Many of the fallen will lick their wounds.

Some will vow to never invest in real estate again. Others will look for the next guru.

Prepare for a market shift

Modify your investing tactics—not only to survive an economic downturn, but to also thrive! Take any recession in stride and never be intimidated by a market shift again with Recession-Proof Real Estate Investing.