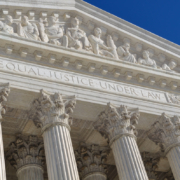 A Supreme Court decision which will determine if the Biden administration can fire the Federal Housing Finance Agency (FHFA) director will arrive before the month’s end.

The court recently updated its calendar indicating its session will extend through the end of June. It has not yet specified when it will issue more opinions for the cases, like Collins v. Mnuchin, it has already heard.

Compliance attorneys are anxiously awaiting the court’s decision. Although many expect the decision to align with last year’s ruling which found the Consumer Financial Protection Bureau’s structure unconstitutional, some are feeling uneasy.

At least one attorney said they felt a “nagging doubt” which stems from the fact that the court took the case up after it decided the CFPB matter. The court’s timing could indicate the justices are thinking about the FHFA challenge differently.

The case stems from the restructuring of the agencies in 2008. A group of GSE investors alleged that the government knew the GSEs would turn a huge profit after a $100 billion bailout from the Treasury in 2008. An agreement between FHFA and the Treasury promised the investors compensation in the form of stock, dividends tied to the amount of money invested in the companies, and priority over the other shareholders in recouping their investment.

But the Treasury modified that agreement in 2012, to require Fannie Mae and Freddie Mac to pay dividends to the Treasury pegged to the companies’ net worth. The arrangement greatly diminished private investors’ ownership interests in the GSEs. Investors cried foul and filed suit in 2013.

“By August 2012, FHFA and Treasury knew that the Companies were on the verge of generating huge profits,” the plaintiffs argued in the suit.

In 2018, The Fifth Circuit Court of Appeals held that the FHFA was within its statutory authority when it enacted the “net worth sweep” of the GSEs’ dividends, but found that the FHFA was not constitutionally structured. This is the issue now before the Supreme Court.

With Calabria all but out the door, a number of agency changes could ricochet through the housing market. A Biden-appointed FHFA director could renew the GSE Patch, which currently expires July 1, and conflicts with the CFPB’s Qualified Mortgage rule compliance date.

The post Supreme Court decision on FHFA expected at any time appeared first on HousingWire.