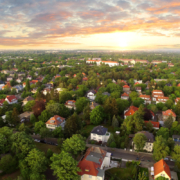 Vacation areas and luxury housing markets aren’t the only ones benefitting from a wave of pandemic buyers: southeastern locales are also filling up. Metro areas with the biggest increases in net inflow in the third quarter included Little Rock, Arkansas; Louisville, Kentucky; and Knoxville, Tennessee, according to Redfin.

Homes are “singing out the door about as fast as they come on the market,” in Little Rock, Arkansas, according to Melissa Bond, a Realtor at United Real Estate – Central Arkansas.

According to the Little Rock Realtors Association in Arkansas, listing count is down 40.5% in October year over year, and there is currently only 2.1 months’ worth of inventory, down 53.5% year over year. In October, pending sale count was up 96.9% from last year.

Because inventory is so low, Bond said she’s been encouraging her clients to sell sooner rather than later.

“My business never really slowed down [in light of COVID-19] because part of it is people have got to move,” Bond said. “I mean, sometimes it doesn’t really matter what’s going on in the world.”

The higher end of the Little Rock market is also considerably stronger, which Bond said includes homes priced at $500,000 and above.

“I think interest rates and the opportunity for people to move up is stronger than it’s been a while,” Bond said.

Deanna Vreeland-Abell, an agent with Century 21 Dick Vreeland & Associates in Louisville, Kentucky, said that her buyers are taking advantage of low-interest rates and are buying more expensive homes.

The reason? Homebuyers are seeking more space now that families are spending more time at home together working and schooling.

“I think people are definitely upsizing for that reason, so that they can spread out when everybody’s at home working and doing school remotely,” Vreeland-Abell said.

In addition to home sales, Vreeland-Abell said that her rental market is hot, too.

“We put a house ready to rent on the market… it’s usually gone within, say, a week to two weeks,” Vreeland-Abell said. “We had a lot of new apartment complexes going up in our area which, typically you would think, would drive down the demand for the single-family but we’ve had no decrease in demand at all.”

Century 21 Legacy agent Joanne Mielenz had a home she was going to show in Knoxville, Tennessee, that was worth $1.1 million, then when she pulled up to the house it was already sold.

“It’s quite a crazy market,” Mielenz said. “We have the lowest inventory of almost all time. We have more pendings than we do inventory, and from the day a home goes on the market to the day it closes is 40 days.”

Mielenz sells land in a lakefront division, and she said this market is the hottest it has been in 11 years. She doesn’t see business slowing down even with the holidays approaching.

“I went to go look at a house today, a preview…couldn’t get in, it’s already pending,” Mielenz said. “So, it’s quite a hot market, if you got a good house it’s going to go.”

Over in Nashville, Tennessee, Troy Charlton with Century 21 Charlton Realty Company, said that single-family housing inventory this year is half as much as it was last year.

“Our market is pretty, pretty hectic,” Charlton said. “[Inventory is] our biggest struggle as far as buyers go, but as far as sellers go, it’s just not a lot of competition out there.”

Although a trend with homebuyers during the pandemic is to seek homes with bigger yards and extra rooms since kids are schooling from home in most places, Charlton said that backyards aren’t as big of a deal anymore in his market. Instead, homebuyers want homes that require less upkeep and more convenience.

According to Redfin, Nashville is ranked as No. 7 on its Top 10 Metros by Net Inflow of Users, saying that 37.8% of its users searched for residences in Nashville, with the highest number of searchers in New York City. Charlton added that there are lots of buyers coming from Florida and Texas, too.

“It is a great time to sell, [but] buying right now is hard, it’s so hard especially for first-time buyers,” Charlton said. “You want to write them the best offer but then, you can’t overextend them, but then it’s what it takes to get it.”

In Kentucky in the month of September, the Greater Louisville Association of Realtors said that with 45% less inventory, the average home sale price was up 7.3%.

In Lexington, Kentucky, Brent Simpson of Century 21 Simpson and Associates said the volume of sales he has seen is “incredible,” and that his market is “very, very competitive.”

“I’ve heard one of my fellow Realtors say they put a house on the market, and had 25 offers on the first day,” Simpson said. “It went over asking, of course.”

Like Vreeland-Abell’s market, Simpson said that the rental and condo market is performing just as well as single-family homes.

“There’s no discrimination, they’re all popular,” Simpson said. “It’s just people saying, ‘does that fit my needs?’ So, we have seen a lot of condos, a lot of townhomes, a lot of single families that are just going very quickly, and multifamily in and around Central Kentucky is very strong.

The post Southeastern housing markets have homes “singing out the door” appeared first on HousingWire.