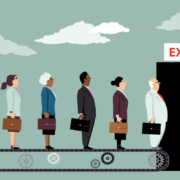 What a crazy day for my economic model! On the same day, the Bureau of Labor Statistics (BLS) revealed that we’ve recovered all the jobs lost to COVID-19 and I am raising my sixth recession red flag.

When I wrote the America is back recovery model on April 7, 2020, and then retired it on Dec. 9, 2020, I knew one data line would lag the most: jobs! I have talked about how job openings would move toward 10 million and that we should get all the jobs we lost to COVID-19 back by September 2022. Well, I was off by two months: Today, the BLS reported that 528,000 jobs were created with positive revisions of 28,000, which gave us just enough to pass the February 2020 levels.

The big job numbers we have seen recently are tied to the decline in the job openings data, which lags also, but we do see a decrease in this data line as it appears for now that the job openings data has peaked in this cycle. It recently went from 11.3 million to 10.7 million, and the recent peak was near 11.9 million.

We have seen increases in jobless claims and slighter increases in continuing claims. However, nothing too drastic yet. Again, at this stage of the economic cycle you should focus on the rate of change data.

A tighter labor market is a good thing; this means people with less educational backgrounds can get employed since we have many jobs that don’t require a college education. The unemployment rate did tick up for those with less than a high school diploma in this report.

Here is a breakdown of the unemployment rate and educational attainment for those 25 years and older: 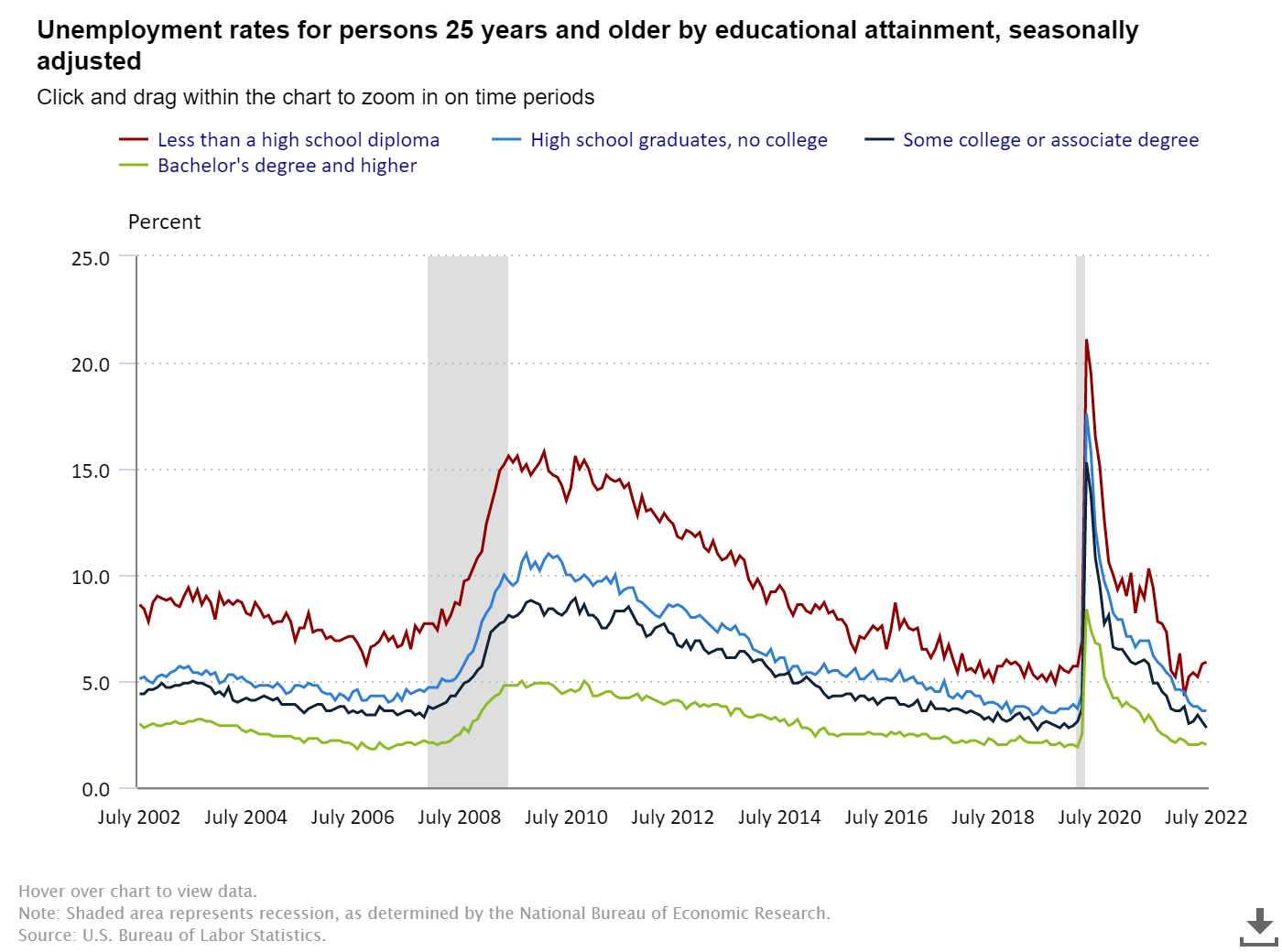 Below is a breakdown of the jobs created. Every sector created jobs; even the government created jobs. All this was just working our way back from the losses to COVID-19, which I knew would take a bit longer than some people would have thought with the economic data we had in 2021. 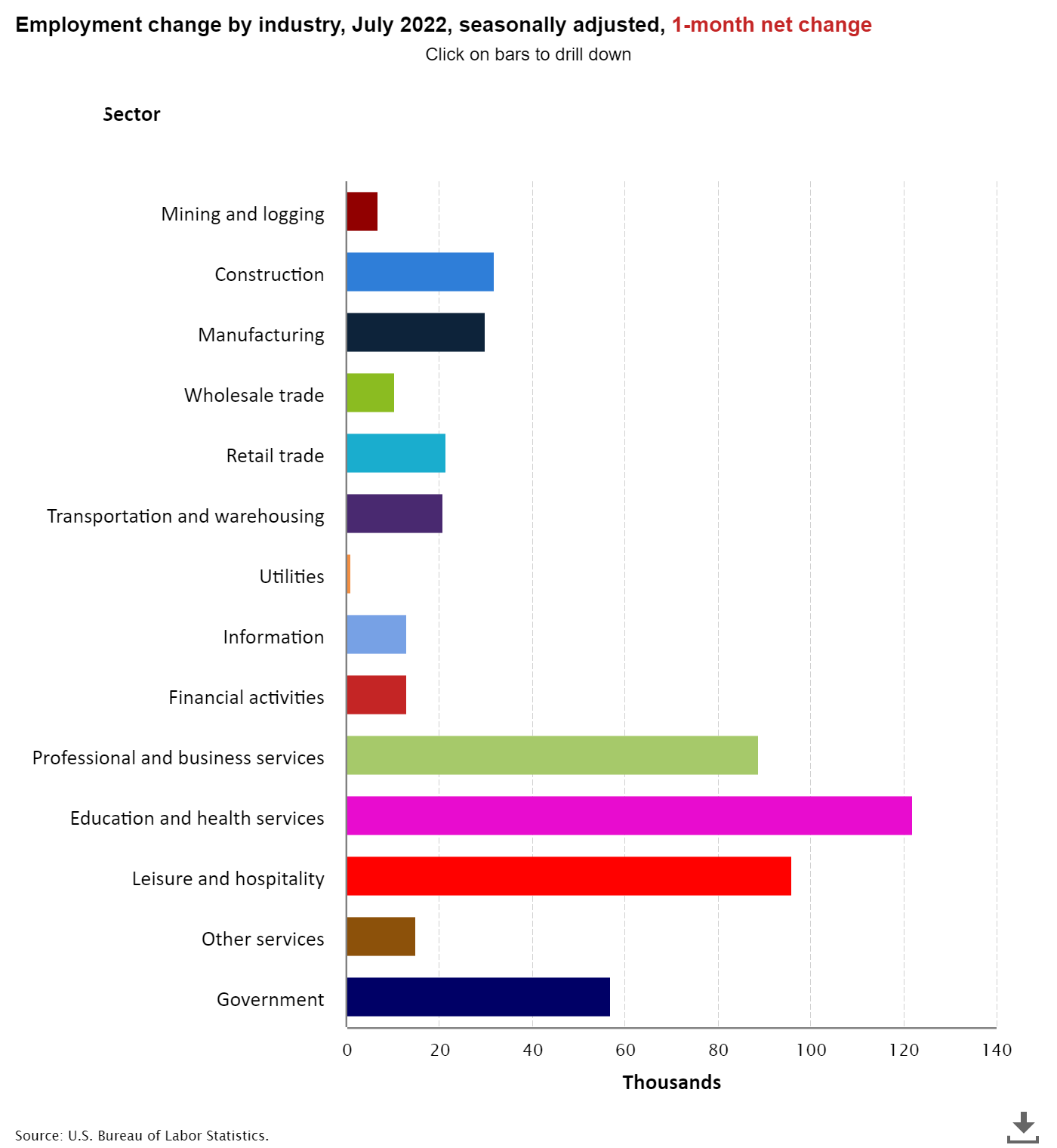 Now that we have regained all the jobs lost to COVID-19, what is next?

Hopefully, people know that we weren’t in a recession in the first six months of the year. When you’re in a recession, you don’t create jobs, have positive industrial production data, or positive consumer data in GDP. We had some funky trade and inventory data that tilted the GDP negatively, but the traditional data lines that go negative in a recession are just not there yet.

Even so, because some of the more current data is trending negatively,  I am raising my sixth recession red flag today. Allow me to present my case.

Where are we in the economic cycle? I’ve already raised five of my six recession red flags, but until they are all up, I don’t use the word recession.

Let’s review those red flags in order, as my model is based on an economic progression model:

4. Find the overheating economic sector where demand can’t be sustained. Once that demand comes back to normal, people will be laid off. We see this in the durable goods data. A few companies are laying people off or putting into place a hiring freeze. 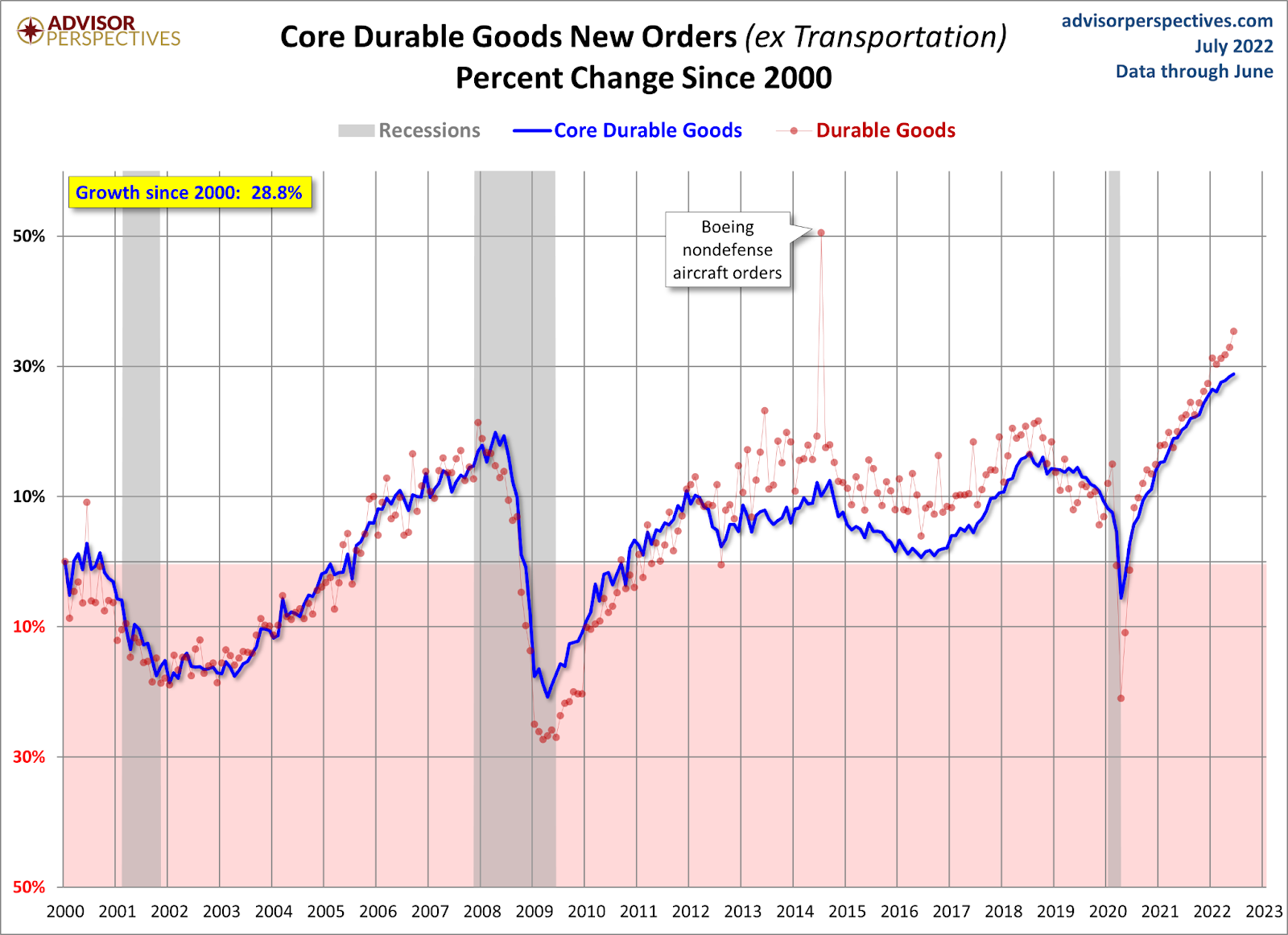 5.  New home sales, housing starts, and permits fall into a recession. Once mortgage rates rise, the new home sales sector does get hit harder than the existing home sales market. The homebuilder confidence index is falling noticeably, and while we never had the housing build-up in credit and sales that we saw in 2005, the builders will slow housing production down with higher rates. I raised my fifth recession red flag in June.

Today, I am raising the last recession red flag, which considers the Leading Economic Index (LEI). This week I presented my six recession red flag model to the Committee For Economic Development of The Conference Board (CED) — the committee that created the leading economic index. “Since its inception in 1942, CED has addressed national priorities to promote sustained economic growth and development to benefit all Americans. CED’s work in those first few years led to great policy accomplishments. One is the Marshall Plan, the economic development program that helped rebuild Europe and maintain peace, the Bretton Woods Agreement that established the new global financial system, and the World Bank and International Monetary Fund.” 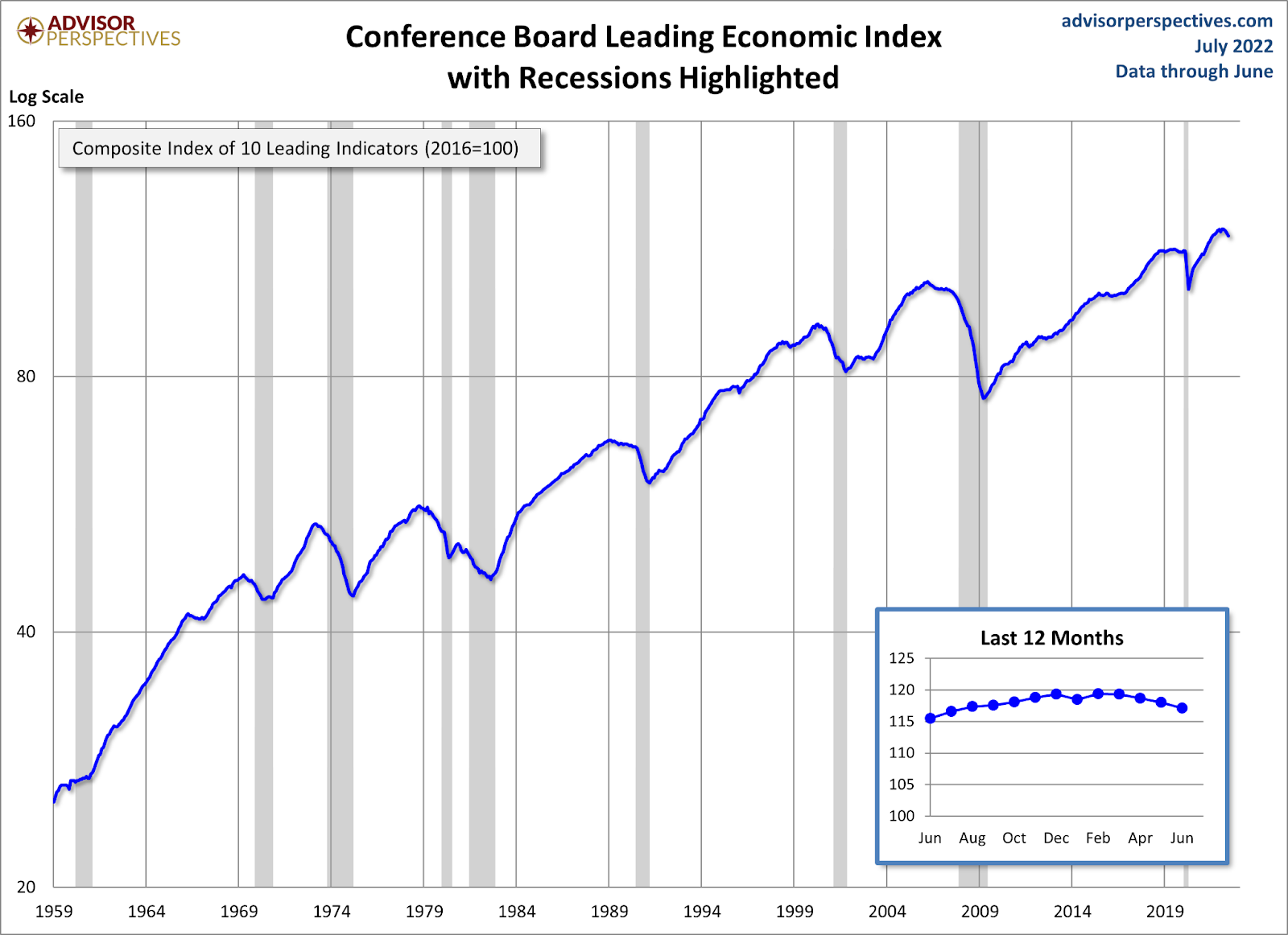 As you can see, the LEI doesn’t have a good history of reversing course when the downtrend is in place. We have had times in the mid-1990s when we saw a slowdown but didn’t get a recession.

With that in mind, how might this reverse? Well, the two easy answers are this:

1. Rates fall to get the housing sector back in line.
2. Growth rate of inflation falls, the Fed stops hiking rates and reverses course, as they did in 2018.

Most Americans are working, and job openings are still high enough that people can find work if they need to. However, if you’re asking me how we could see a reversal after all six flags are up, this is it.

So how do I square raising the last recession red flag when we had such a strong job report today? Well, the model isn’t designed to work during a recession. It’s intended to show the progression of an expansion into a recession.  As you can see below, this data line fell in 2006, and we were still creating jobs in 2006 and 2007. 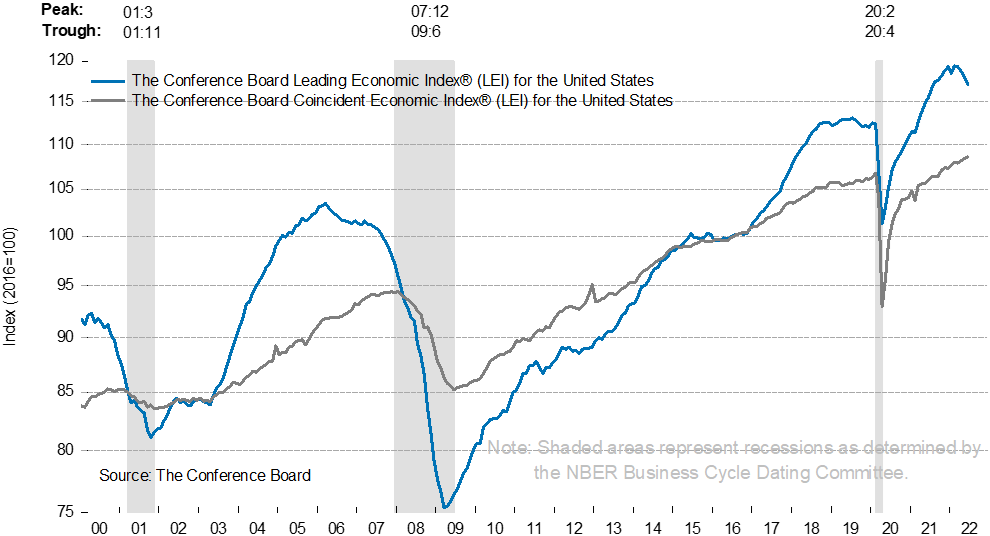 I can’t describe it any other way: things have been crazy since April 2020. All of us that track economic data have had to adjust to the highest velocity of data movement in our lifetime and have had to make COVID-19 adjustments all the time.

At some point in the future, things will get back to normal. I’ve presented you with my data lines to show we weren’t in a recession the first six months of the year, but the economic data is getting softer and softer. I will be looking for weaker data lines getting to the point where we actually see real recessionary data, which means jobs are being lost monthly, production data falls and companies make adjustments to their business model with greater force.

I’ll take each data point one day at a time and try to make sense of it. Remember, economics done right should be very boring, and always, be the detective, not the troll.