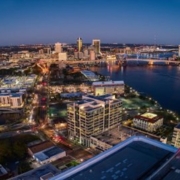 “Have you been seeing the news?” Butler said, with a laugh. “Florida is open for business. The market is incredible.”

But the market is also beset by a 40 percent decrease in year-over-year inventory, Butler said.

Eileen Blocker founded Magnolia Properties three decades ago, and, according to Butler, has been in conversations about cashing out for well over a year.

“This isn’t like Aspen, where you can focus on one thing,” Butler said of the local market. “Jacksonville is just like this massive area.”

Watson Realty Corp. and Florida Home Realty & Mortgage are the top Jacksonville brokerages by sales volume, according to RealTrends 2019 data.

Like other brokerages, RE/MAX weathered a volatile 2020. It suffered a sharp revenue downturn in the spring, but regrouped with a burst of sales activity by late summer.

Like other brokerages, RE/MAX has been bolstering its tech capabilities of late. The firm acquired location data company Gadberry Group in September. It has also upped its focus on mortgage as well – the company already has a mortgage franchise, Motto Mortgage, and added wemlo, a mortgage processing startup, last year.