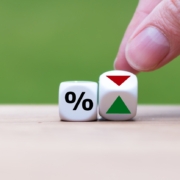 Purchase mortgage rates this week averaged 5.81%, compared to 5.78% the week prior, when rates rose 55 basis points, the largest 1-week increase since 1987, according to the latest Freddie Mac PMMS index.

A year ago at this time, 30-year fixed rate purchase rates were at 3.02%. The PMMS, a government-sponsored enterprise index, accounts solely for purchase mortgages reported by lenders during the past three days.

“Fixed mortgage rates have increased by more than two full percentage points since the beginning of the year,” said Sam Khater, Freddie Mac’s chief economist, according to a statement.

However, another index showed mortgage rates declining this week.

Black Knight’s Optimal Blue OBMMI pricing engine, which includes some refinancing data — but excludes cash-out refis to avoid skewing averages – measured the 30-year conforming rate at 5.9% Wednesday, down from 6.03% the previous week. The 30-year fixed-rate jumbo was at 5.326% Wednesday, a decline from 5.46% the week prior, according to the Black Knight index.

Mortgage rates tend to move in concert with the 10-year Treasury yield, which reached 3.16% Wednesday, down from 3.33% a week before.

According to Khater, the combination of rising rates and high home prices likely is the driver behind recent declines in existing home sales.

“However, in reality, many potential homebuyers are still interested in purchasing a home, keeping the market competitive but leveling off the last two years of red-hot activity.”

Mortgage application volumes rose 4.2% from the past week, propelled by borrowers’ demand for purchase loans. Refi applications decreased 3% from the prior week, and purchase apps ticked up 8%, according to the Mortgage Bankers Association (MBA).

FHFA: No delay on 50 bps fee, but open to “engagement”
Scroll to top