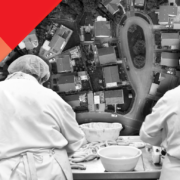 The process of vetting loan pools assembled for private-label securitization deals is, to a degree, like sausage-making.

Few take the time to understand the process, but everyone eating the sausage wants to trust that the ingredients won’t cause them heartburn.

A recent report by the Kroll Bond Rating Agency, however, raises a yellow flag about current loan-review practices in the private-label market that requires examination of the sausage-making. As part of that, it’s important to understand that the due-diligence reviews performed on loan pools assembled for securitizations often make use of a process called loan sampling.

The concept is simple: A random sample of loans is selected for due-diligence review from a larger pool of loans that often numbers in the thousands. The results of the sample reviewed, or vetted for risk, can then be extrapolated to the entire loan pool that has been aggregated to back a private-label residential mortgage-backed securities (RMBS) offering.

KBRA reports that sampling, although in use to some degree for years, exploded in 2021. It is now employed in some form by most issuers of non-agency prime transactions. Then, the bond-rating agency describes another concerning trend.

“The notable increase in due-diligence sampling in 2021 has also come with an unfortunate caveat…,” KBRA reports. “Some loans that are initially targeted for sampling are removed from the pool prior to the completion of review for reasons that are or may be related to loan quality.”

The dropped loans create a potential problem that is known in the world of statistics as a sampling bias. And that bias can lead to an overly optimistic assessment of the quality of the entire loan pool — or, put another way, it can cloak some of the risk.

“These dropped loans are often not accounted for in final disclosures to investors in the same manner as reviewed loans,” KBRA reports.

Loans are dropped from the loan-pool samples for a variety of reasons, the bond-rating firm reports, including low ratings or because they require time for additional investigation to cure defects. “Issuers face time and resource constraints” when bringing deals to market, the KBRA report states, which can lead to loans being pulled from samples before due-diligence reviews are completed.

“We do get requests from issuers to pull a group of loans without a specific reason for why they’re being pulled, and a lot of them are the pending loans,” said Mark Hughes, president of capital markets at Texas-based Evolve Mortgage Services, which provides due-diligence services. “There are some loans that are pulled that potentially could have wound up in the C and D [ratings] bucket. So, they [KBRA] are correct, and there is some hidden risk.”

That “hidden risk” exists because loans in a random sample, both those with good and poor ratings, are presumed to exist in the same proportion across the larger loan pool they have been drawn from for the due-diligence review. Pulling them out of the sample prior to the vetting being completed, then, can distort, or skew, the sample-review results.

Hughes added, however, that in his experience, the bulk of the loans pulled because they had unresolved defects at the time of a securitization’s closing are later resolved and end up with A or B ratings. “And they show up in the next deal,” he said.

“Frankly, when [issuers] are comfortable that most of those [pulled loans] are curable [with more time], they don’t want to take the hit today when they can put them in the deal next month,” Hughes explained.

“The trend is most prevalent in prime agency-eligible investor transactions but is becoming more significant in traditional prime deals,” KBRA reports. “Notably, the uptrend was only observed during the last few months, with 28 of the 39 transactions with [loan] removals … occurring in deals with closing dates during or after August 2021.”

KBRA attributes the recent dramatic rise in loan sampling — and associated loan drops — to several factors. Those include investor acceptance of the sampling practice in prime deals as well as the cap placed earlier this year on the government-sponsored enterprises’ [GSE’s] acquisition of mortgages secured by second homes and investment properties.

Many of the investment-property mortgages — which might have been purchased and securitized by Fannie Mae or Freddie Mac prior to the cap — found their way into loan pools backing private-label deals. The cap was suspended this past September by the Federal Housing Finance Agency, which oversees the GSEs, but the resulting increased deal flow is still winding its way through the private-label market.

“As a TPR [third-party review firm], we are definitely aligned with making sure that investors have the information that they need in order to make smart decisions,” said Michael Franco, CEO of SitusAMC, a major due-diligence firm based in New York. Evolve’s Hughes also agreed with that perspective.

“But we also think that it is incumbent on investors to determine what is the information that they need in order to make smart decisions,” Franco added.

The realities of the free market, however, don’t always dovetail with the demand for full transparency in all situations, Franco explained.

“Issuers are not incentivized to provide any additional information beyond what is absolutely required to get their securitization done,” he said. “Everything that you disclose that you don’t need to is now something that somebody can sue you on.

“So, if you don’t have to disclose it, why would you?”

The KBRA report provides an analogy that helps to better explain the risks of a lack of transparency in the case of loan sampling and related loan drops — absent the complicated statistical analysis.

The bond-rating firm’s report describes a study done during World War II of aircraft returning from battle. A researcher was tasked with examining the planes to see where the bullet holes were so that armor could be enhanced in those areas.

The researcher, however, also decided to consider the planes that were shot down and did not return to base because, in his reasoning, the “armor plating should go where the bullet holes were missing and not where they appeared.”

“In other words, aircraft that did not return pointed to the areas of most critical, but unseen, weaknesses in the original population,” the KBRA report states.

Likewise, KBRA’s report concludes that “understanding where the ‘armor’ is missing will be increasingly important as sampling expands and credit quality changes, even within the prime sector.”

John Toohig, managing director of whole-loan trading at Raymond James in Memphis, said loan sampling and related practices are accepted in the market right now “because of the rabid demand for loans and bonds and the outsized and strong performance of … the collateral.”

“Investors need earning assets and mortgages have been a winner throughout the pandemic,” he added. Toohig reminds, however, that the nation’s housing crash some 15 years ago was the result of a “slow bleed” from a thousand cuts.

“It didn’t happen overnight. It was all in the spirit of efficiency,” he said. “Full-doc went to alt-doc, which morphed to no-doc.

“Then a shock hit the system, the water drained out of the pond, and we got to see who was swimming naked — ugly and all.”