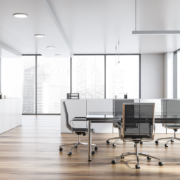 Lovell Minnick Partners, a private equity firm that acquired ATTOM Data Solutions in 2019, announced Wednesday morning that it’s diving further in to the housing space with the acquisition of UniversalCIS.

Lovell Minnick acquired a majority stake in the Philadelphia-based company, which itself has been acquiring companies of late, specializes in providing tech platforms that initialize credit data along with verifications of borrowers’ social security, asset, employment and income. Terms of the deal were not disclosed.

Paul Ryan, the former Speaker of the House, and John Dalton, the former Navy Secretary, will continue to serve on the company’s board of directors. Steve Ozonian, an advisor to Lovell Minnick and an industry veteran, will also join the board.

The investment by Lovell Minnick comes on the heels of a record year for much of the industry. Perry Steiner, the Chairman of UniversalCIS, said that CIS Credit Solution was doing close to $18 million in revenue three years ago. By the end of 2020, it brought in $200 million, and with it, Lovell Minnick’s partnership.

Perry sees the private equity investment as giving UniversalCIS the firepower to create a more all inclusive end-to-end mortgage experience.

“They ended up being our clear partner of choice,” Perry told HousingWire. “And in partnering with Lovell, not only do we have a capital partner who can provide a lot more capital resources for us as we continue to consolidate the market through acquisition, but also really a strategic partner that can sit around with us at the table and really understands the marketplace in terms of what we’re looking to build as a company.”

For the last four to five years, Lovell Minnick has been closely watching the real estate and mortgage market, looking for companies with a good deal of potential, said Jason Berg, partner at Lovell.

“There’s a lot of new technology offerings and new solutions entering the market thanks to the demand in the pandemic, and being a best in class service provider is more important now than ever since so many originators and brokers are choosing to outsource various parts of their product offerings,” Berg said.

With Lovell Minnick’s capital in place, Perry said UniversalCIS plans to continue its acquisitions tear. the company the firm’s servicing side has reached “critical mass” but there is still plenty of opportunities to construct the highly sought after “end-to-end solution” many companies are working towards, Perry said.

In the past year alone, a number of companies have worked to acquire technologies and products looking to offer more one-stop-shops to lenders, brokers and the like. Black Knight acquired Optimal Blue and it’s PPE engine, Mastercard picked up Finicity and its financial data aggregation, and Blend just bought out Title365 and its title insurance offerings from Mr. Cooper on Monday.

“I genuinely believe we are seeing a reevaluation of the sector overall,” Berg told HousingWire. “Providing a best in class service technology to those firms is an ever increasing need. It’s increasingly important. And that makes firms like UniversalCIS more and more relevant.”