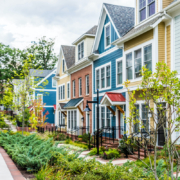 Fannie Mae‘s Home Purchase Sentiment Index, which tracks the housing market and consumer confidence to sell or buy a home, dropped by 2.1 points to 73.2 in March from the previous month. Compared with the same period a year ago, the index fell 8.5 points.

Of the six index components, a survey-high of 69% of respondents expect mortgage rates to continue their upward trend over the next 12 months. About 73% of the participants said it’s a bad time to buy a home, setting a new survey-low.

Consumers expect their financial situations to worsen over the next year. These concerns will likely diminish mortgage demand from move-up buyers, which in turn will translate into fewer available entry-level homes, Palim said.

Respondents worried about job losses increased 2 percentage points to 11% in March from February. About 13% of the survey participants said their household income was significantly lower in March than the past 12 months, a percentage point increase from the previous month.

“If consumer pessimism toward home buying conditions continues and the recent mortgage rate increases are sustained, then we expect to see an even greater cooling of the housing market than previously forecast,” Palim said.

In March, the ESR Group projected total home sales to decline 4.1% in 2022, down from a 2.4% drop forecast the previous month.

The post Now is basically the worst time ever to buy a home appeared first on HousingWire.