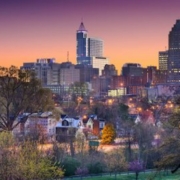 Robbin Sutton with DASH Realty Carolina has been a broker for 20 years, and she’s never seen anything like the current housing market in the Raleigh-Durham metro.

“I’m on my way with a client to show them a house that’s literally just gotten on the market, and by the time we get there, it’s already under contract with someone else,” she said. “It’s just insane. I don’t think I’ve ever seen this many sight-unseen buys in my life.”

Such is the life of the agent and broker in the hot North Carolina metro, which has seen an enormous uptick in transplants since the beginning of the COVID-19 pandemic as work-from-home mandates are allowing people to live wherever they want.

Raleigh-Durham, with its low cost of living compared to larger U.S. cities, has attracted movers from New York, Washington D.C., and Philadelphia, among other large metros, Sutton said.

“A $200,000 home will generally go for at least $25,000 over asking price around here,” she said. “You have to be quick. I’ve had a few couples from New York — Manhattan and Brooklyn — that come down here armed with cash, but inventory is low and there’s nothing for them. There’s less than 30 days worth of inventory for homes under $300,000 right now.”

The idea of “more space” has driven homebuyers during the pandemic, with people wanting to get out of crowded metros and into homes with more land. That’s been the case in North Carolina, where rising home prices are still a bargain compared to other areas of the country.

“It’s just an inventory problem right now,” Sutton said. “Plus, we’re a due diligence state, so right now if you don’t go way over listing price and offer a substantial due diligence price, there’s no point in even submitting an offer.”

The current average due diligence is around 3.1% of the asking price, Sutton said, but she said she’s seen some fees hit 10%.

“It’s absolutely the craziest it’s ever been for me,” she said.

Kirk West, a broker for West and Woodall Real Estate in Durham, said the sheer number of buyers willing to purchase a house sight-unseen has stood out to him since the pandemic started.

“I’ve seen $100,000 over asking price and $50,000 in due diligence money, and that’s a lot of cash for not even seeing the property in person,” he said. “But this is a great place to live. We’ve got some great businesses coming to our location, the quality of life is pretty good, and despite the crazy offers, the cost of living is still generally pretty low compared to the rest of the country.”

Builders in North Carolina haven’t struggled as badly as the rest of the country, per Thomas Hennessey with West 4th LLC in Durham.

“We probably only started seeing problems in the last four to five months,” he said. “We were able to build quite a bit in 2020. Thankfully, most banks were still lending. But now, for sure, it’s gotten too expensive. New builds, framing, plywood — it’s all out of control.”

Hennessey said his company pivoted to doing mostly renovations in the past few months, declining new builds in order to save money.

“Our renovations don’t generally have to do with lumber, so that’s how we’re focusing our time right now,” he said.

Kristy Pollard, a new home specialist with Terramor Homes in Raleigh, echoed those challenges. “We’ve had to shift our focus away from what we would traditionally call a pre-sale market, where the buyer could personalize the home for themselves beforehand,” Pollard said. “We’re currently not even listing homes for sale until we know how much it would cost on our end. We have a really healthy influx of people that like to come to this area, but we are fully an inventory-only sales company right now.”

Business-wise, tech companies are starting to come to Raleigh, Hennessey said, underlining the growth of the area. Biotech already has a strong footprint, with KBI Biopharma, QPS Clinical Drug Development, ReciPharm, and Catalyst Biopharmaceutical Research calling the area home. Tech startups like PrecisionHawk, Republic Wireless, LearnPlatform and PennyMac have flocked to the area as well.

And, of course, the aptly-named Research Triangle, anchored by research universities North Carolina State University, Duke University and University of North Carolina at Chapel Hill can be found in Raleigh, Durham, and Chapel Hill. This area, with a U.S. Census-reported population of more than 2 million, is home to numerous tech companies.

“This has always been a pretty great place to live, it’s just more people are coming now,” Hennessey said.

Cash Out Refinances vs HELOCs
Scroll to top