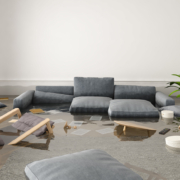 Changing environmental conditions will put 13.6 million residential properties at risk of flooding in 2051, an increase of 1.2 million over the next 30 years, according to a report published Monday by the nonprofit group First Street Foundation.

“Our nation’s infrastructure is not built to a standard that protects against the level of flood risk we face today, let alone how those risks will grow over the next 30 years as the climate changes,” said Matthew Eby, founder and executive director of First Street Foundation.

In 2051, 2.2 million miles of road will be at flood risk, compared to 2 million today. One in four critical infrastructure facilities – emergency services such as fire, police, and hospitals – in the country are at risk of becoming inoperable today because of flooding, representing 36,000 units. In 2051, it will increase to 38,000.

The risks are not only in well-known regions such as the coastal plains along the Gulf and Southeastern coasts, but also in the Appalachian Mountain regions of West Virginia and Kentucky.

Louisiana, Florida, Kentucky, and West Virginia concentrate the risk of flooding, with 85% of the total counties on the list, according to First Street Foundation. Cameron Parish in Louisiana has the highest flood risk. Metairie (LA), also in the same region, is the number one city, followed by New Orleans (LA) and Cape Coral (FL).

The counties with the most increase in risk over the next three decades are Norfolk City (VA), followed by Portsmouth City (VA) and St. Mary Parish (LA).

Over the past 20 years, political discussions about infrastructure have centered on physical attacks, energy crises, and terrorism, even though climate change has a higher impact, the report said.

The impact of climate change on the housing market entered the agenda of regulators, investors, and lenders.

The Federal Housing Finance Agency (FHFA) requested this year inputs on the risks of natural disasters and climate change on Fannie Mae and Freddie Mac’s portfolios.

In September, the Mortgage Bankers Association published a report that concluded that climate change will increase mortgage default and prepayment risks. Such risk could trigger adverse selection in the loans sold to government-sponsored enterprises and increase the volatility of house prices.

“The physical destruction caused by flooding and other extreme weather events will continue to influence the behavior of portfolio lenders, the GSEs, the federal government’s FHA/VA programs, and mortgage investors,” said Sean Becketti, author of the report.

The post Nearly 14 million homes at risk of flooding in next 30 years appeared first on HousingWire.