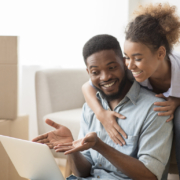 The SPCP, called “closing the gap,” permits a 1% down payment with a free appraisal, free home warranty program, free homebuying counseling and financial assistance with closing costs. The SPCP loan program will be piloted in Atlanta, Baltimore, Chicago, Detroit, Memphis and Philadelphia. Borrowers must presently reside in a census tract of the six cities that has 51% or more Black population.

The loan program uses credit guidelines based on factors such as timely rent, utility bill, phone, and auto insurance payments. The underwriting guidelines are based on the borrower’s income with a minimum credit core of 620.

“There may be others coming out with similar SPCP loan programs, but don’t be fooled, Legacy Home Loans is where you are celebrated not just tolerated,” said Slayton, who was the first Black Realtor to be licensed in the U.S., and has worked in the mortgage industry for over 50 years.

Only recently have mortgage lenders felt comfortable moving forward with special purpose credit programs. In December, the Department of Housing and Urban Development released guidance that SPCPs would not violate the Fair Housing Act, which has long discouraged creditors from developing programs.

A few months later, seven federal agencies — including the the Federal Reserve, the Federal Deposit Insurance Corporation, the Office of the Comptroller of the Currency, the Consumer Financial Protection Bureau, the Department of Housing and Urban Development, the Department of Justice and the Federal Housing Finance Agency — released a statement encouraging lenders to develop SPCPs.

In a press statement, Legacy noted the 30% homeownership gap between Blacks and whites.

In June, the FHFA unveiled equitable housing finance plans for Fannie Mae and Freddie Mac, which establish a framework for the government-sponsored enterprises to close the racial homeownership gap.

What Makes Rookies Into Millionaires? Quitting What You Hate!
Scroll to top