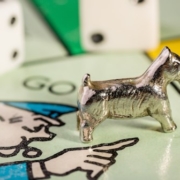 In my last article, “The Twenty-Something’s Guide to Financial Stability,” I discussed some of the common financial mistakes that are often made by young folks. But it is true that you can be broke at any age. For me personally, I’ve been both rich and poor. I was raised by a working, single mom with six kids on government assistance, and today, I’m considered an accredited investor.

What I didn’t go very far into last week is the impact of debt and taxes, especially on one’s ability to access capital or build wealth.

One thing that I recognize is that income inequality and the wealth gap are growing in this country between the rich and poor, while the middle class is shrinking. If I were to narrow it down to one of the biggest reasons for this, it would be one’s access to capital.

Related: Americans: If You Can’t Build Wealth Today, You Should Be Scared. Here’s Why.

The difference is that poor folks just don’t have very much access. Just think about when you try to get a loan; it’s often based on your credit, income, and assets. Also, they often have to work for or earn all of their money, and then they’re usually taxed the most (as a percentage of earned income).

Maybe the real struggle is getting out ahead of these things. I remember listening to Jim Rohn tell the story about how you can be a good guy, work really hard, and still never get ahead.

It wasn’t until I understood the different types of money and how they’re taxed, along with the various tax breaks available, that I realized the true path to wealth.

As much as debt and taxes made poor folks poorer, it also made rich people wealthier. So, why is that?

How the Rich Utilize Taxes to Build Wealth

When I was young, an old real estate developer I was working for pounded into my head, “It’s not what you make; it’s what you keep.” It’s so true.

Even if you’re a high income earner, like a doctor, you’re probably taxed the highest. In Pennsylvania, you could be handing over close to half of your earned income, and I’m sure in California it’s much higher.

But as a real estate investor, if I had $1 million of rental income, my taxes would be much lower, especially with all the write-offs made available in the tax code. A wealthy real estate investor could then turn around and use the earned $1 million to purchase a $4 million apartment building (utilizing debt, leverage, and tax breaks).

This investor would come out much further ahead, especially since passive income (and portfolio income) is much more favorably taxed than earned income.

Most less well-off individuals just don’t have many deductions, and on top of that, they have the most highly taxed type of income. All the government tax breaks seem to be given to those who benefit society more by providing jobs, housing, or by running things like nonprofits.

How the Wealthy Use Debt

When it comes to using debt, I also see a big difference. Wealthier folks are using things like private equity, government grants, and bank loans. They also have the best attorneys, accountants, and entity structures, as they are always considering the tax implications of everything they do.

For example, if the $4 million apartment building I mentioned before appreciates in value to $5 million, the investor might borrow against that new equity via an Equity Line of Credit and then use that capital to buy a cash-flowing asset or invest at a higher rate than their interest payment. This access to capital is also tax-free because it’s a loan.

The lower income folks often fall prey to using bad types of debt. By this I mean debt used to purchase something that goes down in value or doesn’t throw off any additional cash flow. They often spend more money than they make, and they pay excessive rates and fees for things like insurance, bank loans, and credit cards due to poor credit or because they are considered a higher risk. The poor and middle class may need more student loans than wealthier students, too.

I remember my early struggles when attending to a more affordable state college. I was commuting for the first two years since I couldn’t afford to live on campus, and I was working four to five nights a week. While my wealthier friends had more time to study or have fun, most of my free time was spent commuting and working. It was much harder to get good grades with all of the financial stress.

At the end of the day, it was and still is all about access to capital.

As the wealth gap and income inequality continue to grow, just be sure to think about how you’re making your money, how it’s taxed, how much you get to keep, what your plan for the money is, and how that use of capital will be taxed.

Today, I’m living proof that, it’s not about what you make, but what you keep.

What do YOU think? Are debt and taxes big contributors to the wealth gap?

Leave your comments below.