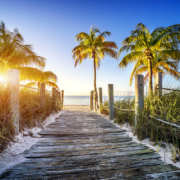 The Sunshine State seems to be getting a lot more foot traffic these days, with the number of homebuyers moving to Miami tripling year-over-year, according to a new analysis.

According to Redfin’s monthly migration report, July saw the net inflow of Redfin users packing their bags and moving to Miami rise to 7,610, up from 2,216 last year.

Milagros Alvarez, a Miami real estate agent at Redfin, said that the pandemic “has brought even more out-of-towners to the area” because so many people can now work wherever they want.

“Homebuyers are moving here from all over the map—Atlanta, Cincinnati, New York, Columbia, Mexico City, Pittsburgh and Philly, to name a few,” said Alvarez. “The beaches, warm weather and low taxes are the major draws. Florida has also been much less shut down than other states during the pandemic, which some house hunters see as a positive.”

However, the pull of warmer weather in Florida has some downsides, mainly that there is risk posed by coastal flooding and storms.

The report noted that Miami is “one of the most vulnerable in the world” when it comes to damages caused by weather-related events, with 59% of Miami’s properties facing some level of flood risk.

Sea levels are also projected to rise by two feet or more by 2060 in the Miami-Dade County, threatening to displace many residents, the report said. Additionally, the region faces extreme heat risk.

Despite a mounting list of reasons why one shouldn’t move to Florida, buyers seem to be unperturbed.

“The homebuyers I talk to rarely mention climate change. Most of them aren’t concerned,” Alvarez said. “A lot of people seem to have this idea that it won’t impact them in their lifetime, so it doesn’t need to be a consideration when buying a home.”

Daryl Fairweather, chief economist at Redfin, warned that “the recent UN climate report that places like Miami will see the impacts of climate change within the next thirty years.”

“Miami homebuyers should think about how they can make their homes more resilient to climate change and how their finances would be impacted if their homes lost value,” he said.

The report remarked that big, expensive cities normally lose the most residents and that “the trend accelerated during the pandemic as remote work gave people the flexibility to leave expensive job centers for relatively affordable places.

“Yet, a handful of the metros that experienced the largest outflows in July saw fewer people leaving than a year earlier—likely because many of the pandemic restrictions that made those places unattractive places to live have now been lifted,” the report said.