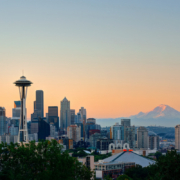 King County in Washington is the 12th most populous county in the U.S. with 2.2 million people, and — as home to Seattle — it is one of the wealthiest pockets of America. At the end of August 2019, there were 5,472 homes for sale in King County, according to the Northwest Multiple Listing Service. At the end of this August? There were just 2,268 houses, per the Northwest MLS, down 241%.

Based in Kirkland, Washington, the Northwest MLS compiles home listings, and tracks sales for 26 counties in Washington state, which also include mid-sized cities like state capital Olympia, the state’s islands, and rural, mountainous enclaves. The not-for-profit company released an array of data about the Washington market on Tuesday.

As journalists who cover what is new, we’d love to tell you that, according to the numbers, the vise grip of low inventory and high demand is weakening. But, at least in the Evergreen State, that’s not the case.

By the end of this August, there were 7,425 active listings, a more than 200% cliff dive from two years ago.

Inventory began to tumble last summer as real estate agents’ predictions of “pent up demand” amid the coronavirus pandemic came true. But inventory in the Pacific Northwest is still falling. The 7,425 listings were 23% down from last August, and even a 7% dip from this July.

The lack of homes available at a given moment in time should not be confused with a dramatic dip in sales, noted Matthew Gardner, chief economist at Windermere Real Estate in Seattle. In fact, Northwest MLS tallied the number of August 2021 homes whose sales closed at 10,571. This represents a 10% jump in closed sales from August 2020.

There is not enough building in the Seattle area and zoning codes are too restrictive, Gardner argued, and that hurts supply. But the real story is demand.

“What is happening is that homes are going on and off the market remarkably quickly,” Gardner said. “They spend six or seven days, and then often sell above list price.”

Historically low mortgage interest rates and millennials new to the housing market are driving this demand, Gardner said. Also, the economist noted, there is growing demand in Snohomish and Pierce counties, which are adjacent to King County, and draw people who may commute into Seattle just once or twice a week.

John Deely, vice president of Coldwell Banker Bain in Seattle, said many of his clients arrive from California and work for either Seattle-based Amazon or another large technology company.

“They come in and rent for a year and get a feel for neighborhoods and areas, and then look to buy,” Deely said.

Another factor, Deely said, is single-family rental companies. “We have Wall Street focused on the single-family market,” the agent said. “They hold it as an investment, rent it out, and eat into the available inventory.”

Deely believes that the number of investor-owned homes in the Northwest MLS coverage area has significantly grown over the last two years. But Northwest MLS does not track such numbers, Deely noted, “And it is hard to keep count with the companies’ different LLC names.”

The post Home demand soars in the Pacific Northwest appeared first on HousingWire.

Mortgage rates stuck at 2.88% amid rise in COVID cases
Scroll to top