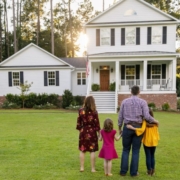 The total number of loans in forbearance managed to fall three basis points last week to 4.22% of servicers’ portfolio volume, according to a report from the Mortgage Bankers Association. A drop-off in the number of exits did mark a slower decline than in recent weeks, however, Monday’s data still marks three consecutive months of downward trend for forbearance volume.

Fannie Mae and Freddie Mac continued to boast the smallest share of loans in forbearance, down three basis points last week to 2.21% or their portfolio volume. Ginnie Mae loans also fell two basis points to 5.59%, while the forbearance share for portfolio loans and private-label securities (PLS) remained the same relative to the prior week at 8.26%.

“Although the overall share is declining, there was another increase in forbearance re-entries. Currently, 5.3% of loans in forbearance are homeowners who had cancelled forbearance but needed assistance again,” said Mike Fratantoni, MBA’s senior vice president and chief economist.

Another 82.9% of plans are in an extension while the remaining 11.8% are in the initial forbearance plan stage. Overall, the MBA estimates there are still approximately 2.1 million homeowners in some form of mortgage postponement.

A recent early look at Black Knight’s delinquency numbers revealed there are still 1.8 million homeowners that are 90 days past due ― four times as many as there were prior to the pandemic. The data analytics giant reported the vast majority of those in this serious delinquency category are in some form of forbearance, putting the end of Q3 and beginning of Q4 as an inflection point in terms of understanding how things may shake out in a post-forbearance world.

“The job market is recovering, but the pace of recovery thus far is slower than we had forecasted,” said Fratantoni. “Continued job growth is needed to help more struggling homeowners get back on their
feet.”

April’s job numbers were lackluster at best for an economy said to be rebounding with the U.S. Labor Department reporting that a mere 266,000 new jobs were created last month, far below projections. Following the report, Fratantoni said the trade group continues to expect robust job growth and housing demand through the remainder of the year, but April’s report suggests that the rate of improvement in the job market is going to be much less consistent than other indicators.

Should You Manage Legal Documents Digitally? Yes—Here’s Why
Scroll to top