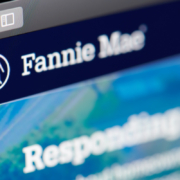 In its earnings call on Friday, Fannie Mae reported net earnings of $4.84 billion, a 32% decline from the prior quarter. Freddie Mac meanwhile earned $2.9 billion, a 21% fall from the second quarter.

Still, executives at the government sponsored entities stressed that the third quarter was among the best in their respective histories.

“It was another strong quarter for the housing market and for Fannie. Our results reflect the credit quality of our guaranty book, a growing economy, strong home price growth, and low interest rates,” Hugh Frater, Fannie Mae’s CEO, said on the Friday call.

Michael DeVito, who was appointed as CEO of Freddie Mac in the spring, said that Freddie Mac had completed its “best quarter for home loan purchases since at least 2010.”

Executives at Fannie Mae said Friday that home price growth was strong again in the third quarter, but not as strong as the second quarter. And mortgage rates were generally below 3% during the third quarter but eclipsed 3% in the last week of September.

“Due to the growth in our book of business, we’ve seen base g-fee income increase both quarter over quarter and compared to the third quarter of 2020,” Benson said, noting that it paid $3.6 billion in g-fee income to the Treasury, a 30% increase year over year.

Single-family refinances and prepayment activity slowed compared to Q2, with net amortization dropping to $2.3 billion in Q3 from $3.7 billion in Q2.

“While refinance activity was lower compared to last quarter, it remained elevated compared to historical norms due to the continued low interest rate environment we have seen since the onset of the pandemic,” Benson said.

He further noted that Fannie’s net worth increased to $42.2 billion at the end of the third quarter and stressed that building the GSE’s net worth “continues to be critical.”

Freddie Mac, the smaller of the two, reported that net worth totaled $25.3 billion at the end of September, up from $22.4 billion at June 30.

Fannie Mae expects the pace of both home price growth and refinance volumes to decline in the upcoming quarters, “likely resulting in lower net revenues and lower credit benefits over the next year,” Benson said.

Both GSEs reported a decline in serious delinquencies.