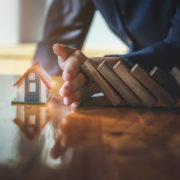 The deal is valued at $3 billion, including debt. It’s the fifth SPAC carried out by Capitol.

The transaction is expected to provide up to $645 million in cash proceeds and a fully committed private investment in public equity (PIPE) of $300 million. Up to $345 million of cash will be held in Capitol’s trust account.

Officials said approximately $510 million of the cash proceeds are expected to be retained by Doma, and existing Doma shareholders will own no less than approximately 80% of the equity of the newly combined company.

“The platform benefits lenders, real estate professionals, title agents, and homeowners, and has become even more crucial as the impacts of COVID-19 and record-low interest rates have created a huge tailwind behind home purchase and refinance,” Simkoff said.

Doma has a long ways to go before it can seriously put a dent in the “Big Four” title insurers – it currently has less than 1% share of the title market in the U.S. but projects to be at 5% by 2023. Doma is backed by Lennar, one of the nation’s largest homebuilders.

Doma saw revenues of $179.8 million in 2019 and $189.7 million in 2020, according to filings made with the Securities and Exchanges Commission. Generally accepted accounting principal (GAAP) revenues are expected to be around $226.4 million in 2021.

Simkoff, who will retain his position, said adoption and usage of the company’s core products exceeded expectations in 2020, despite the COVID-19 pandemic wrecking havoc on the country’s economy.

“We pushed hard against our product and operational expansion road map, and this accelerated momentum is helping remove friction from the home buying and refinancing experience,” he said. “This partnership with Capitol demonstrates their confidence in our strong growth position as we continue our sprint to architect the future of real estate transactions.”

The company reported that Capitol CEO Mark Ein will join the merged company’s board of directors.

“Our mission at Capitol is to help build industry-leading public companies that deliver long-term value, and Doma is an industry disruptor that is well on the way to doing just that,” said Ein.

Other housing-related companies that have gone public via a SPAC in the last year include United Wholesale Mortgage, Matterport, Porch and OpenDoor.