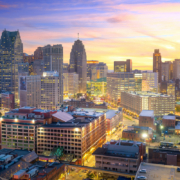 The Gilbert Family Foundation will contribute $350 million, and the Rocket Community Fund will invest $150 million, Gilbert announced during his first television appearance in years.

Initially, Gilbert’s family foundation will completely eliminate the property tax debt owed by about 20,000 low-income homeowners in the city of Detroit. The Gilbert Family Foundation claims this will preserve roughly $400 million in wealth and home equity in the city.

“Everyone deserves to achieve the American dream of homeownership, and that includes the ability to sustainably and permanently enjoy the home you make for yourself, your family and your loved ones,” said Gilbert. “The greatest resource of any community is its people, and we are honored to be able to invest in removing this tax burden, which will build a stronger foundation for Detroit families to thrive.”

The $15 million investment will establish the Detroit Tax Relief Fund, which will be administered by Detroit nonprofit Wayne Metro Community Action Agency. Wayne Metro will pay the remaining delinquent tax burden on behalf of qualified residents.

Why mortgage lenders should give back

HousingWire’s Clayton Collins joins On Q Financial President and Founder John Bergman to discuss how and why lenders should give back to their communities, and the unique opportunity On Q Financial had recently to help a family in need.

Presented by: On Q Financial

“I’d like to see the people of Detroit benefit,” Dan Gilbert said in an interview with CBS This Morning’s Dana Jacobson. “You look at every level in downtown right now and we have to carry that through to the neighborhoods and have the whole city have that energy.”

The Rocket Community will also invest $150 million, primarily focused on housing, employment and public life issues. The fund’s “Neighbor to Neighbor” program reduced the number of homes entering the Wayne County Tax Auction in 2019 by 94% over a five-year period, the organization said.

Gilbert, whose mortgage company made a record $9.5 billion in profit in 2020 on the back of $320 billion in originations, is known for practically single-handedly revitalizing Detroit’s desolate downtown. In 2010, Gilbert moved the headquarters of Rocket – then known as Quicken Loans – from the suburbs to downtown. Gilbert has purchased and developed more than 100 Detroit properties, rehabbing and tenanting the buildings.

Gilbert is also a backer of the university he graduated from, Michigan State. He donated $16 million to the university in 2016. Just weeks after mortgage executive arch-rival Mat Ishbia of United Wholesale Mortgage announced a $32 million donation to Michigan State, Rocket reached a sponsorship deal with MSU to plaster their name on the basketball team, which Ishbia was a member of about 20 years ago.