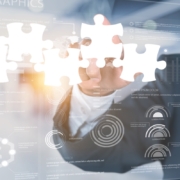 UniversalCIS and Credit Plus, firms that provide credit reports, income verification and related solutions to mortgage lenders, today announced a merger they claim will make them the largest in the sector.

UniversalCIS has been on an acquisition tear of late. In 2020, during a banner year for the mortgage industry, it acquired Universal Credit, CIS Credit and Avantus. The combined firm subsequently rebranded as UniversalCIS. In January 2021, UniversalCIS entered the appraisal management sector with the acquisition of SharperLending.

In March, private equity firm Lovell Minnick Partners acquired a majority stake in UniversalCIS, and Steiner said it expected to make more acquisitions. UniversalCIS followed through on that promise with the acquisition of the lending solutions arm of DataFacts in August.

Paul Ryan, the former Speaker of the House, and John Dalton, the former Navy Secretary, serve on the company’s board of directors.

Credit Plus and UniversalCIS said their firms’ merger will result in a firm with a book of 6,500 clients, spanning banks and non-bank mortgage lenders, credit unions and mortgage brokers. The combined company will have 750 employees and operations in 12 states, and will be headquartered in Philadelphia.

The two firms said they aim to redefine parts of the mortgage process that have remained unchanged for the past 10 years. By enhancing “certain areas around decisioning and workflow efficiencies,” Steiner said, the firms hope to take a bigger step toward the completely digital mortgage.

Navigating the mortgage industry’s digital transformation comes with its own perils, as ransomware attacks target firms in the mortgage and title industries.

Once a matter of “checking the box,” guarding against ever more sophisticated attacks has become a major part of doing business, Steiner said. The firms said that although it was not a specific rationale for the merger, their combined resources will allow them to make investments in security.

“There’s no industry or company in the world that is safe from ransomware attacks,” Steiner said. “I feel for the mom and pop [companies] who don’t have the deep pockets to protect against the risk.”