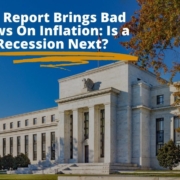 Last week, the Bureau of Labor released data showing the Consumer Price Index (CPI)—the most commonly used measure of inflation—rose 8.6% higher in May 2022 compared to May 2021. This is up from an 8.3% reading in April and represents the highest year-over-year inflation figure in more than 40 years.

Unfortunately, another high inflation figure shouldn’t be a huge surprise to anyone. We all know that inflation has skyrocketed. We see it daily at the gas pumps, the grocery stores, and just about everywhere we spend money.

But even as we all have come to expect inflation, the details of this most recent report were particularly bad. It actually represents an acceleration in rising prices.

As you can see in the table above, we saw monthly increases in the CPI average of around 0.7% for most of the last several months. Then, in March, it spiked to 1.2%, primarily due to the impact of the Russian invasion of Ukraine and the corresponding shock to the energy market.

In April, things started to look up. While prices still rose, a monthly increase of 0.3% was the best print we saw in months and offered a glimmer of hope that inflation, while still increasing, was starting to approach a peak.

Then May rained on that parade. While most economists believed inflation in May would grow around 0.7%, it was up 1%, which is a big step backward.

If you look at the chart, in most of the last several months, at least one or two categories saw lower prices on a month-over-month basis. Every category in May saw increased prices for the first time since November 2021.

This was a discouraging CPI report, and inflation will likely be with us for a while. So, the question remains, how and when will inflation come under control?

To answer that question, we need to briefly review what inflation is and how we got here.

Inflation is when the spending power of the U.S. dollar declines. In other words, prices rise, and you have to pay more to get the same goods or services.

Inflation is a highly destructive force in an economy. It stretches the budgets of everyday Americans and makes it more difficult for people, especially those at the lower end of the socio-economic spectrum, to make ends meet. It also damages the U.S. in terms of international trade and can cause other societal issues. It’s crucial to contain inflation when it spikes like it’s doing right now.

It’s worth noting that some modest inflation is considered a good thing, as it stimulates the economy. Because people know (in normal times) prices will continue to rise a bit each year, they are incentivized to spend their money now rather than wait. For example, why would you wait to buy a car if that same car will be 2% more expensive next year?

The incentive to spend ensures businesses can continue to grow. This is why the Federal Reserve targets 2% annual inflation.

A variety of complex factors causes inflation, but as with most economic concepts, it can be traced back to supply and demand. When demand exceeds supply, which is where our current economy is, inflation occurs.

Right now, demand is up for two primary reasons.

First, people want to do stuff and spend money again! After a couple of years of restricted activity, people want to travel, go out to eat, buy cars, and experience life again. It’s as if all the pent-up demand from the last two years is being injected into the economy.

Second, a tremendous amount of money has been introduced into the economy. This is known as an increase in “monetary supply,” meaning more money is moving around the economy. People are willing to pay more for goods when there is more money in the economy.

Just think about it, if you had only $1,000 to your name, your willingness to pay for a sandwich might max out at $10 (1% of your net worth). But if you suddenly had $1,200 to your name because more money is injected into the economy, perhaps your willingness to pay for that same sandwich goes up to $12 (still 1% of your net worth).

Overall, demand is high due to the easing of COVID-19 restrictions plus a rapid and dramatic increase in monetary supply. These are conditions that make it ripe for inflation.

But on the supply side, we also have conditions primed for inflation. Typically, in a healthy market, when demand spikes, suppliers increase production to meet that demand. This keeps prices relatively stable and allows the suppliers to sell more goods and generate more revenue.

But, given the global supply chain issues we’re facing, suppliers cannot scale up production to meet demand. Instead, the only way to moderate demand is to raise prices.

Right now, we really do have the perfect storm of inflation—super high demand alongside constrained supply.

Many economists and analysts (myself included) expected inflation to peak (not stop or deflate, just slow down) sometime in the middle of 2022, mostly because supply constraints would moderate. The thinking was that as economies reopened, the supply chain would recover. While demand would likely remain high, suppliers could increase production to meet that demand, and inflation would cool off.

Unfortunately, two major geopolitical events upended that hope. First, Russia invaded Ukraine, and dramatic sanctions were introduced. Removing Russia (and Ukraine in many ways) from the global economy is straining a supply chain that was already struggling. Secondly, China has continued to impose lockdowns to contain COVID, leading to lags in Chinese manufacturing and the production of goods.

It seems that the May inflation report reflects this new reality. Demand has remained high, as most people expected, but the supply-side relief that was hoped for is not coming to fruition. As such, inflation is higher than its been in over 40 years.

This typically works, but it takes time and can have other negative economic consequences—namely, a recession.

As interest rates rise, people borrow less money to make big-ticket purchases like a new car or home. That reduces revenue in those industries, leading to less spending and layoffs.

As for businesses, they are also less likely to borrow money and, as such, will purchase less equipment, hire fewer people, expand into fewer markets, and often have to lay off employees. This, in theory, cools the economy to the point where demand shrinks to meet supply at equilibrium.

So that’s where we are. Inflation is unacceptably high, and the Fed is raising rates aggressively to stop it.

While no one knows what will happen, here are my current thoughts. Remember, this is just my opinion based on the currently available data:

As the Fed raises rates, many parts of the economy will be negatively impacted. We’ve already seen the stock market enter bear market territory this week (down more than 20% off its high), and Bitcoin is down more than 60% as of this writing. There are still roughly 10 million job openings in the U.S., but I expect the labor market to loosen in the coming months as layoffs pick up. With all these factors converging, I believe a recession will likely come in the next couple of months.

That said, recessions come in many different forms. Right now, it’s very unclear if it will come, how long it will last, and how bad it could get. I think that depends on if and when inflation comes under control.

As for housing prices, which I’m sure everyone here is curious about, I think there is a growing market risk. I’ve said for the last few months that I believe prices will moderate dramatically and could turn flat or modestly negative (on a national basis) in the coming year. Still, I think that by the end of 2023, housing prices will be +/- 10% of where they are today nationally. On a regional basis, I expect some markets to see dramatic drops (more than 10% declines) while others may keep climbing.

What do you think the implications of this inflation data are? Let me know in the comments below. Be sure to also listen to the On the Market podcast, where we discuss the direction of the economy and the housing market in more detail.

On The Market is presented by Fundrise

Fundrise is revolutionizing how you invest in real estate.

With direct-access to high-quality real estate investments, Fundrise allows you to build, manage, and grow a portfolio at the touch of a button. Combining innovation with expertise, Fundrise maximizes your long-term return potential and has quickly become America’s largest direct-to-investor real estate investing platform.