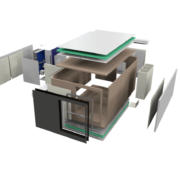 Seattle and London-based construction technology company Modulous has raised $11.5 million in its Series A funding around, according to an announcement on Monday.

Founded in London in 2018, Modulous uses a software platform to automate the design, cost planning and programming of modular multifamily construction projects using its pre-configured set of sub-assemblies, which it calls its “kit of parts.” Modulous’s software generates designs and massing for a given build site based on the firm’s physical “kit of parts,” including 3D visualizations and cost plans, which give developers real-time insight on return-on-investment calculations.

“The five co-founders, we all have backgrounds in construction and in 2017 we were all working together and we lost five big projects, about half a year’s worth of work, in one week and we knew we couldn’t carry on the way we were doing things,” Chris Bone, the firm’s CEO said. “So, we decided to digitize ourselves. We had no clue what we meant by that, but we knew that all the other industries were digitizing themselves, but for some reason, construction seemed to remain very backward in how things were done.”

Modulous works with supply chain partners, which includes US Gypsum and Hilti, to create its kits. The firm says its partners have focused their collaboration on reducing the number of components required to produce the Kit materials. This approach has made it possible to measure and calculate the accurate carbon content of a scheme, and to ensure the use of healthy, non-toxic materials.

Kits include things like floor panels, wall panels, ceiling panels and wet walls that can be assembled to form a module. Bone says it takes five people three hours to put together a module. The assembled modules are then brought to the construction site where the interior finished and exterior façade are added.

In addition, the firm says its platform and production methods enables 50% faster project delivery, 60% reduction in embodied carbon, and 70% reduction in construction waste.

“If you have ever put together a Meccano toy set you know how much harder and more time consuming it is to build one of those than a Lego set,” Bone said. “Meccano is like the traditional building method and Lego is the Modulous building method.”