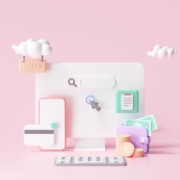 The CFPB found digital engagement – whether reflected in enrollment in online portals, enrollment in mobile apps, opt-in rates to e-statements over paper equivalents or electronic payment of credit card bills – is growing consistently across all age groups and on nearly every platform type.

According to the report, the most consumers ever recorded are paying their credit card bills online or via mobile app. Concurrently, the use of paper-based payments has declined.

The CFPB pointed to the pandemic as the most likely motive for this upwards trend in digital adoption as credit card issuers were faced with a series of challenges in how to address demand for credit, the need for relief and the servicing of existing accounts.

“COVID-19 necessitated a sharp adjustment in the operational posture of major credit card
issuers,” the CFPB said. “In some ways, the consumer impact of the acute destabilization in issuer customer service might have been worse if issuers had not established digital servicing channels prior to the pandemic.”

The Adoption of Digital

According to the report, pandemic-driven concerns around the use of cash or touching a payment terminal appeared to further the digital evolution at the point of sale, driving enablement and adoption of contactless payment methods such as “tap and pay” and digital wallets.

Concerns over contact coupled with bank branch closures, shortened hours, postal service delays or social distancing may have also incentivized consumers to use online or mobile tools to check balances or cash a check more frequently than in pre-pandemic periods.

To assist with pandemic-driven longer wait times, the CFPB also reported a spike in AI-powered chatbots and user engagement with these bots.

Also noteworthy is the rise in the share of accounts enrolled in mobile apps, which has more than doubled in only five years, from 30% in 2015 to 64% in 2020. Although this adoption is more common in younger consumers, 2020 saw an increase in older generations downloading and utilizing mobile financial tools – a trend the Bureau expects to continue.

Innovations the Bureau is Watching

As part of the report, the CFPB releases a number of trends in financial innovation that it has either acutely observed or in some cases directly facilitated. In general, the recent additions fell in to three categories:

Tapping in to credit

A number of recent options have become apparent for “credit invisible” borrowers to both acquire credit cards as well as repair their current credit history. The report used Varo Bank as an example as the fintech introduced a credit card which reserves the amount spent from a linked bank account to ensure users never miss a payment.

Other offerings from Synchrony, TomoCredit, Acima and Apple’s ‘Apple Card Family’ that would allow partners and families to build a shared credit history were also mentioned.

Since the Bureau’s 2019 report which found some of the buy now, pay later frenzy was already beginning, the CFPB noted market observation that estimate U.S. BNPL lending jumped from $3 billion in 2019 to $39 billion in 2020, and will exceed $100 billion annually within three years.

“The extent to which BNPL competes directly with credit cards – either as a means of payment
for consumers’ purchases or as a means of purchase financing – is unclear,” the CFPB said.

For the Bureau, key differences between BNPL loans and credit cards may present risks to consumers as BNPL lenders are not required to consider ability to repay before extending credit. As a result, the bureau reported traditional credit card issuers are investing in more ways to offer their own “fixed-payment”
features, possibly in response to BNPL’s explosive growth.

Nevertheless, the Bureau acknowledged its success and integration in industry leaders like Affirm, Klarna and Afterpay, as well as its prosperity overseas.