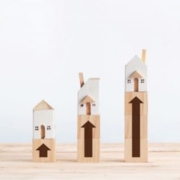 Home prices continue to increase across the country, as the latest S&P CoreLogic Case-Shiller Home Price Index report showed a 12% annual gain in February — up from 11.2% in January. It’s the ninth straight month of increasing prices.

The 12% home price gain is the highest recorded increase since February of 2006.

Phoenix, San Diego, and Seattle reported the highest year-over-year home price gains among the 20 cities in February, with Phoenix leading the way with a 17.4% increase from 2020. San Diego showed a 17% increase, and Seattle showed a 15.4% increase.

“This data remains consistent with the hypothesis that COVID-19 has encouraged potential buyer to move from urban apartments to suburban homes,” Lazzara said. “It also represents buyers who accelerated purchases that would have happened anyway over the next several years.”

Every region of the country logged double-digit gains in home prices, led by the West (+13%) and the Southwest (+12.9%).

“Home price appreciation pressed higher in February as competition for housing remained red hot,” Speakman said. “As more signs emerge that the economy’s recovery is gathering steam, a wave of eager buyers, many of them seeking their first home purchase, remain determined to find their next home. But with relatively few for-sale homes on the market, bidding wars have become increasingly common, pushing sale prices higher and leading homes to sell at a record pace.”

“Some recent signs suggest that the historically tight inventory pressures may finally be starting to ease,” he said. “Should those signs materialize, the meteoric rise in home prices may finally have a reason to come back down to earth. For now, red hot home price appreciation shows few signs of cooling.”

Appraisal modernization: What is going on with the forms?
Scroll to top