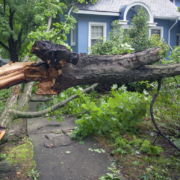 The threat of natural hazard risk in United States is on the rise. According to the National Centers for Environmental Information, there were 22 weather and climate disasters in 2020 which cost over $1 billion. This is nearly 150% more than the average of 16.2 events for the most recent five years, and three times the average of 7.1 events for the past 40 years.

But what effect does climate change have on real estate—or, specifically, on a home’s property value?

Otay Ranch is a neighborhood 20 miles south of downtown San Diego. It is part of the city of Chula Vista, a place whose name translates to “beautiful view” and boasts an idyllic location nestled between San Diego Bay and the coastal mountain foothills.

In analyzing the relationship between property values and natural hazard risk, the former was estimated with Total Home ValueX—a new state-of-the-art automated valuation model from CoreLogic that leverages artificial intelligence and machine learning capabilities built on cloud technology, and that reflects the price of recently sold similar properties nearby. Properties in the same neighborhood were used to serve as a control for value differences between different markets.

In addition, hazard risk scoring was used to identify the properties with the greatest risk from perils including flood, wildfire, tornado, hail, surge, earthquake, straight line winds, hurricane wind, and sinkhole. The probability of an event, or the frequency of those events, is a significant factor in determining the risk levels. Otay Ranch, in particular, is close to valleys and parks which have had brush fires in the past.

With a nearly $75,000 gap, it becomes evident that homes in Otay Ranch at higher risk also have lower property values.

Does the Trend Persist?

In Otay Ranch, it is clear that homes with higher risk have, on average, lower property values. But does this tendency continue across different neighborhoods?

In a similar analysis for Stockton, a neighborhood on the east side of downtown San Diego, there are 61 properties that have high hazard risk, and their average price is $463,000 (compared to a neighborhood average $534,000). In this case, the difference between higher risk homes and lower risk homes was worth almost $70,000.

To round out the comparison, a third neighborhood was viewed—the Loma Alta district in the city of Oceanside, located about 40 miles north of San Diego. Here, 191 out of 2,098 properties are identified as high hazard risk with an average value of $544,000 (as compared to a neighborhood average $612,000).

The discount for high hazard risk properties is more than 10% in both Stockton and Alta Loma.

As our growing population and associated residential development expands into higher natural hazard risk areas—thus increasing the number of homes in those areas—an increasing number of properties are becoming more exposed to climate change risk.

San Diego, in particular, has seen the expansion of new construction and development into the wildlands, thus exposing a greater number of homes to the susceptibility of wildfire. But even outside of California, hurricane-prone Florida has become an increasingly popular destination for homeowners seeking sunshine and lower prices. As the climate changes, these homes, too, will only increase in exposure to hazard risk.

Although this research is still seminal, and other factors could give rise to pricing differentials in various neighborhoods, it is of crucial importance for homeowners, mortgage lenders, insurers, and policymakers to understand the holistic impact of climate change—and in turn, natural hazard risk—on property values. A proactive approach to this challenge and the resultant effect it has on the housing market will be critical in promoting a healthy housing ecosystem.

The post Are higher-risk homes cheaper? appeared first on HousingWire.