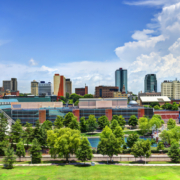 Nashville is hardly the only Tennessee city attracting significant interest from out-of-staters drawn to the Volunteer State. Many are eyeing scenic East Tennessee, where Knoxville and its surrounding suburbs have formed one the country’s hottest housing markets.

Currently on Realtor.com, more than 2,000 homes are currently on the market in Knoxville with an average listing price of $270,000. But like the rest of the country, low housing inventory has hit the city hard. According to the Knoxville Area Association of Realtors, the number of houses for sale in 2020 was down 47.5% year-over-year. The KAAR also said housing inventory dropped for six straight months to start the new year.

Owen Poveda, a broker for RE/MAX preferred company Home in the Smokies, said he gets between six to 12 offers per property, usually with bids heading up to 10% over asking price.

“It’s a daily hustle for me,” he said. “I never know how my day is going to go, because when a new listing comes on the market in Knoxville, the race is on. It’s like a horse race. You set your appointments the night before, and when you get there that morning, they might already be under contract.”

Even with the market cooling ever-so-slightly, the lack of inventory has created pressure for buyers to snatch up what remains in Knoxville’s housing market, a growing city that’s nestled in the Appalachian Mountains and is the home of the University of Tennessee, said Jeff Grebe, owner of Knoxville’s Weicherts Realtors Advantage Plus.

“It’s not quite as much of a frenzy as it was, but it’s still a strong market out here,” Grebe said. “You might have a home sold in days instead of just hours, but pretty much anything we put on the market is getting grabbed.”

Grebe said 78% of homes sold in May went for list price or above, and 40% of those sold for at least 26% above list price.

“We’re still getting a ton of all-cash offers, too,” Grebe said.

There’s high-paying jobs in the area, too. Established tech companies like Lirio, AUBO Robotics, and SmartRIA have roots in Knoxville, with more companies reportedly on the way.

But broker Renee Humme, with Prime Mountain Properties, said the lower property taxes, mountains and surrounding scenery, and low cost of living are the main draws for most of her clients.

“Most of my clients are from out of state wanting to own second homes or investment properties here,” she said. “I’m getting anywhere from three-to-10 offers on each property, and sometimes more. Generally, they go under contract in a day or two.”

Poveda said he usually discourages his buyers from waiving an appraisal — a popular tactic that has popped up during the housing craze of the last 18 months.

“I don’t like it when people waive an appraisal just to get into a home, but what I like to do to win for my buyers is to agree to the home inspection, but we’ll just make it pass or fail,” Poveda said. “We won’t renegotiate with you, and that seems to help buyers a ton.”

On the construction side, builders throughout the country are struggling to keep up with demand, as lumber and building material prices remain high. Production and delivery delays are hindering projects, as well.

HousingWire reported back in March that lumber prices alone more than quadrupled since April 2020, to an astonishing $1,500 per thousand board feet. Today, lumber alone is adding nearly $36,000 to the final price of a new build. New appliances needed for home builds have increased in prices as well — the median price of refrigerators, washing machines, and ovens had increased 10% by the end of 2020, according to the National Association of Homebuilders.

Knoxville-based builders, however, seem optimistic, according to local real estate agents. More than 3,000 residential residential building permits for single-family residences and duplexes were filed in 2020, according to The Market Edge, a real estate research company. Similar numbers are expected in 2021 as more workers receive the COVID-19 vaccine and supply lines speed up.

“We’re definitely seeing a ton of new projects,” Grebe said. “Like most areas of the country, we’ve seen prices go up significantly. It’s difficult for buyers at times, but overall, they are developing land and building on it as quick as they can.”

The post A look at Knoxville’s hot housing market appeared first on HousingWire.

Enverus grows Southwest base with Integrity acquisition
Scroll to top