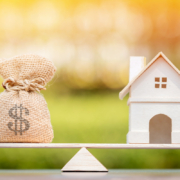 After a July doldrums during which there were no agency-eligible private-label securitizations (PLS) backed by mortgages on residential investment properties, the ice was broken this month with a new offering sponsored by Blue River Mortgage III LLC.

The prime PLS offering, dubbed GCAT 2022-INV3, is backed by a pool of 1,259 mortgages valued at $423 million. More than 97% of the loans in pool are agency-eligible investment properties, with the balance second homes.

In addition, a separate non-prime (non-agency) private-label offering backed by mortgages on investment properties hit the market in August as well. That offering, Verus 2022-INV1, is a $389.5 million deal with the underlying collateral consisting of 853 rental-property mortgages.

The major loan originators for the GCAT offering, according to KBRA’s bond-rating presale report, were loanDepot, 35.8%; Homepoint, 28%; and Arc Home, 21.6%. The bulk of the loans by volume in the offering were originated in California, 29.8%; New York, 11.6%; and Texas, 10.4%. Deal sponsor Blue River is a fund managed by Angelo, Gordon & Co. L.P., a global asset-management firm with some $50 billion in assets under management.

The Verus offering is sponsored by VMC Asset Pooler LLC, which along with Verus Mortgage Capital, is an affiliate of Invictus Capital Partners LP — a real estate credit-focused alternative-asset manager.

“All of the loans in this transaction [were] originated by various lenders, none of which comprises more than 10% of the pool,” a Kroll Bond Rating Agency (KBRA) presale rating report on the Verus deal states.

The bond-rating presale report does not identify any of the lenders by name. The bulk of the loans by volume in the Verus PLS offering were originated in California, 37.2%; Florida, 18%; and New York, 10.4%.

The two new investment property-backed deals so far in August are a sign the PLS market is still working as a liquidity channel for some deal sponsors. The pace of deals in July and so far in August, however — a total of three non-prime and only one prime deal — is down considerably from earlier in the year, based on PLS deals and data tracked by KBRA.

Year to date through mid-August, there have been 28 prime (agency-eligible) private-label securitizations (PLS) backed by loans on investment properties valued at $12.8 billion and nine non-prime deals backed by loan pools valued at $2.6 billion, according KBRA.

In total for the year through mid-August, then, across the prime and non-prime markets, a total of 37 PLS securitizations have come to market secured by $15.4 billion in investment-property collateral — primarily single-family rentals owned by non-institutional landlords.

Then came July, and deal flow in the investment-property residential mortgage-backed securities (RMBS) sector slowed to a crawl, with only two non-prime PLS deals and no prime securitizations, KBRA’s data shows.

A recently released report by Atlanta-based digital-mortgage exchange MAXEX echoes KBRA’s data. The report attributes the PLS deal slowdown in July to risk aversion, as fears of a recession linger, and to shrinking originations in the face of interest rate volatility.

“There were no agency-eligible (prime) investor securitizations in the month of July,” the MAXEX market report states. “A combination of factors, including [loan] supply, widening spreads and low-risk appetite have tempered issuance.”

It remains to be seen how th balance of August will play out on the deal front. MAXEX’s report, however, offers some positive news on the loan-trading front.

The loan aggregator, which serves some 320 bank and nonbank originators and more than 20 major investors, reports that it “saw an increase in investment-property loan locks” through the platform in July. That’s an indicator that the pace of offerings may start to pick up again this fall — given loans are typically seasoned for several months prior to securitization.